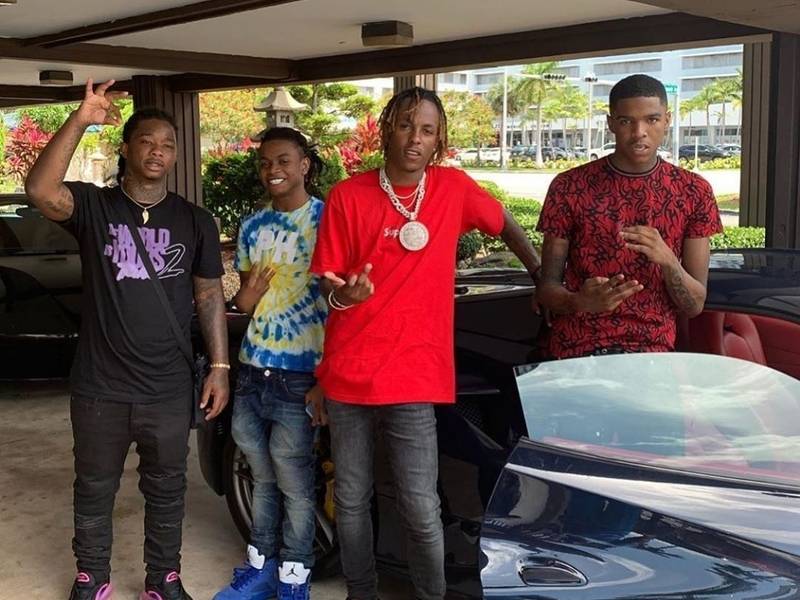 Rich Forever Music’s 83 Babies met with HipHopDX at the offices of Atlantic Records in New York City to discuss their upcoming project Big 3. As it turned out, the trio would also be signing a deal with Atlantic that same evening.

Lil Tony, Young Boss Tevo and Set It Off make up the trio 83 Babies. Co-signed by Rich Forever Music CEO Rich The Kid, 83 Babies is already making waves with the singles “No Cap” and “Talk My Shit” featuring NLE Choppa. Now, they have the Atlantic machine behind them.

In a plush couch adjacent to a window looking over the busy streets of Times Square, 83 Babies spoke to DX about their newly inked deal, working with Rich the Kid and more.

HipHopDX: Congratulations! How are you all feeling in this moment?

Lil Tony: It feels surreal … it ain’t even hit me all the way.

Young Boss Tevo: Yeah, me either.

HipHopDX: Clearly, I don’t think any of you were born in ’83. So, how did you all come up with the name 83 Babies?

Lil Tony: It was a mixtape name … we just came together for a collab.

HipHopDX: How did you all get connected with Rich The Kid?

Young Boss Tevo: All I’ll say is free Marshall … shout out to Marshall.

Set It Off: Yeah, it was because of our cameraman at the time that hooked us up.

HipHopDX: So what were you all doing before music?

Set It Off: I had just came home from juvenile [detention], so I was finishing alternative school.

HipHopDX: Before signing to Rich Forever, were you all ever skeptical about signing to another artist that is presently relevant?

Set It Off: We just felt like if everything was genuine, we could fuck with it, as long as niggas wasn’t finessing.

Lil Tony: For me, it was based on relationships.

Set It Off: We had to put business before personal because you know…you can’t be playing with people’s money.

HipHopDX: I want to say congrats again on signing to Atlantic. I didn’t know that was going to happen today, I feel that I got an exclusive. Did you all have any fears prior to signing with a major label like Atlantic?

Lil Tony: The outcome is going to be good though!

HipHopDX: I saw Kevin Gates jumped on the “No Cap” joint with a remix and then NLE Choppa jumped on “Talk My Shit.” How did y’all link with them?

Lil Tony: They reached out. And Choppa was on tour with us.

HipHopDX: Who else would ya’ll wanna work with?

HipHopDX: Of course! No female artists? We have so many females popping in the game right now.

HipHopDX: How do y’all feel when some of the older vets in the game give negative energy towards your generation of artists coming up?

Set It Off: It’s young nigga time. We here to stay.

Lil Tony: You know some artists not giving you respect until you up there with them.

HipHopDX: So, let’s talk about the project coming out, Big 3. What can we expect as far as features, production?

Set It Off: We got some shit with Tay Keith on there.

Young Boss Tevo: We got Jeff…

Lil Tony: Yeah. [Laughs] Seth In The Kitchen and my boy Joey Bars produced something.

HipHopDX: What was the vibe behind naming it Big 3?

Lil Tony: That’s just what it is.

Young Boss Tevo: We the big 3!

HipHopDX: So what’s next for 83 Babies? What’s lined up?

Set It Off: We on the Blueface tour.

Rich The Kid walks back into the room and takes a seat next to the guys.

HipHopDX: Hey Rich, being that you are a relevant artist, how do you find time to dedicate to your career plus the careers of 83 Babies and the rest of the Rich Forever roster like Airi, and Jay Critch?

Rich The Kid: We have a great team of people that’s solid. We going hard 24/7, waking up every morning dedicated to doing what we do.

HipHopDX: What made you gravitate towards 83 Babies for recruitment to Rich Forever?

HipHopDX: Is it necessarily a bad thing when an artist is inspired by other artists?

Check out 83 Babies on the new Rich Forever 4 compilation, which can be streamed below.