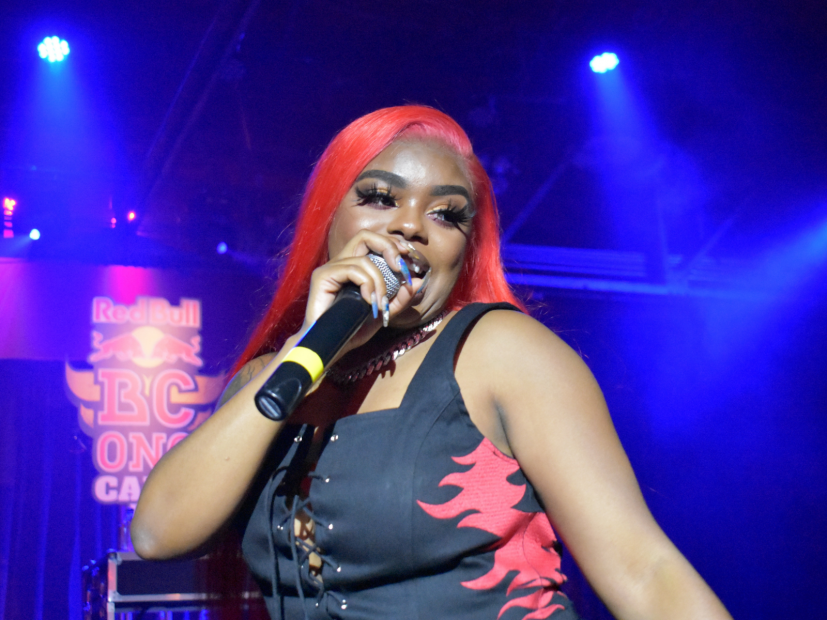 #DXCLUSIVE: Dreezy Wants Meek Mill & Rihanna On Her Next Album

Before strutting out to meet her Houston audience at the Red Bull BC One Camp USA, Dreezy toasted a full bottle of Hennessy to her team in her dressing room. She’d finished up a recording session that morning at 3 a.m., gotten on a plane at 5 a.m., was performing at midnight and would get back to traveling that morning at 6 a.m.

Besides the Red Bull BC One weekend, Dreezy’s been cooking up a busy year, too. The Chicago-bred artist dropped her album Big Dreez in January and is already looking to follow it up with a new full-length project later this year. She’s also making her film debut in the upcoming Netflix movie, Beats, starring Anthony Anderson and Dave East.

Dreezy says she’s been focusing on diversifying her brand and getting creative with her promo. For example, becoming a multi-talent by acting and fashion designing and printing up “Dreezy Dollars” to throw out at her audience during “Where Them $ @.”

“I learned, like, how to be more creative with the music,” she tells HipHopDX.

Here, Dreezy opens up about her work ethic, getting back into her vulnerable bag in her upcoming project and her love for Kash Doll.

HipHopDX: You’re about to perform at BC One, how are you feeling?

Dreezy: I’m so excited because every time I’m in the studio I drink Red Bulls and to actually be invited to the event it’s like, ok, my shit coming to life! It’s cool. I know this is a big brand and I know if [the audience is] off the Red Bull I bet they turnt up right now!

HipHopDX: Do you have a connection to breakdancing?

Dreezy: That’s a real sport, that’s something that I don’t think I would ever be able to do. It takes a lot of strength—head strength. They be balancing on their head!

HipHopDX: Congrats on your movie coming out! Can you tell us a little bit about it?

Dreezy: Thank you! The movie’s coming out June 19th. My first movie, I’m so excited. I got to work with Anthony Anderson, y’all know he’s funny as hell, but in the movie he played a very serious role but behind the scenes he was just so fun and so cool and teaching me how to do this stuff. I’m excited to see it. I haven’t seen it yet, so when y’all see it, I’ll see it.

Man I’m sooo excited to announce that I’m co-starring in my FIRST movie EVER! And it’s with the legendary @anthonyanderson & @uzoaduba !! June 19th “BEATS” the movie will be on @netflix to watch. Thank you sooo much @mrrobotodirector for being patient with me and allowing me to bring yo vision to life ???? @khalileverage you a star! congrats bro. S/o to @daveeast Thank yu @xclusivekeshb and @darryllovetv for being my support. Link in my bio for full trailer #RiseAboveTheNoise #BEATSonNetflix

HipHopDX: Did you feel a personal connection to the movie since it takes place in Chicago?

Dreezy: I felt real appreciated ’cause even with the role they didn’t go through an agency. I didn’t do like an acting audition or nothing. Well I did end up doing an audition, but they specifically wanted me for the role. I get to be the girl repping for my city, like this is my life story.

HipHopDX: You’re working on a new album and you’ve said you’re going to get back into your emotional bag. Why didn’t you do that with Big Dreez?

Dreezy: I think when I was making Big Dreez I was at a point in my life where I really just didn’t give a fuck. Like I was single, I had my money, I was traveling–I just really stopped caring about the little things. I was just feeling myself– Big Dreez! –you know? So it wasn’t personal for me and I felt like as the year was going on real shit started happening to me. I lost my friend, like my work and my career, I had to figure out my management situation, I was just going through a lot of stuff and wanted to express it and I felt like, damn, maybe I should put this on the next album.

HipHopDX: Is it coming out this year?

Dreezy: For sure this year. I just thought of a name for it today, but I’m not gonna tell you [laughing]. It’s kinda—it’s pre-named. You know how you start coming up with ideas? Like this might be it.

HipHopDX: Who do you want to be featured on it?

Dreezy: I want Meek Mill on it and Rihanna. That’s what I’m trying my best for. We gon’ get it.

HipHopDX: Do you think it’s possible to be on top of both the sexy and lyrical food chain as a female rapper?

Dreezy: Yes. You definitely gotta have both. Well, you don’t have to have both, [but] when you do it’s like, ok, she’s a double threat. Sometimes a triple threat, because I sing too. It just gives you a one-up on everything and it makes you more of an artist than just a rapper. I don’t like being called just a rapper. I like music, I like melodies, I like singing, I like these beats, I’m into the whole thing.

HipHopDX: You’ve said 2019 is going to be a big year for you. You’ve got two albums, a movie, what else is in store?

Dreezy: We’ve got a lot of merch on the way, making product. I can’t really tell you what it is but it’s gonna be a big thing for me. I’m customizing my merch to where it’s not like t-shirts and just hats, it’s like real cute and stylish and like what girls would want to wear and it’s stuff that I haven’t seen designed before, so I’m coming up with new designs. Fashion Week coming, BET Awards coming, my album is coming, it’s gonna be a No. 1 album, [Jacquees’] album coming, we’ve got a new song on the way, I got videos on the way. I’m shooting this month, so I’m trying to stay busy.

HipHopDX: Are you still going to go out on tour?

Dreezy: I was planning on a solo tour, but I’m thinking about canceling it because I wanna work on my next album. There’s videos that I haven’t shot yet from my last project that I would wanna shoot first before I go out on the road. Like we dropped Big Dreez but we didn’t shoot no videos for it, except for “Chanel Slides,” which is doing real good. But I just want to put out more content before I go on tour.

HipHopDX: Will Kash Doll and you make another song together?

Dreezy: She wants to be on the next album, so we definitely will. That’s my bitch! Kash Doll is one of the realest female rappers. I love her, we act like sisters when we’re together.

Dreezy: Not just the culture, but even myself as a brand. Like, last year I went through a time where I was in a bad contract and I couldn’t get out of it for like almost two years, so I couldn’t make no music. I was like, wow, what’re you gonna do Dreez? Two years with no music, how are you gonna pay the bills? Then I started thinking of myself as a brand, like, oh, you can act, you can do fashion, you can do merch, you can do real estate, you know what I’m saying? That’s when I started thinking of myself bigger than a musician. I feel like once you’ve got a platform or a fanbase, period, you can do whatever you want to.

HipHopDX: What did you learn from Big Dreez?

Dreezy: Creativity comes first–always–which I already knew that anyway. But nowadays like the internet is driven off the internet, so you can’t just put out music no more, you gotta think of ways to present it and bring it to life with your graphics, videos, that’s something I experimented with in this project that I didn’t do with my last project and it worked real good for me. Like it kept my Instagram and followers going, just having content to push your music. The attention span for the generation right now is real short, so you just gotta entertain people. Like I think Big Dreez taught me that I’m more of an entertainer.