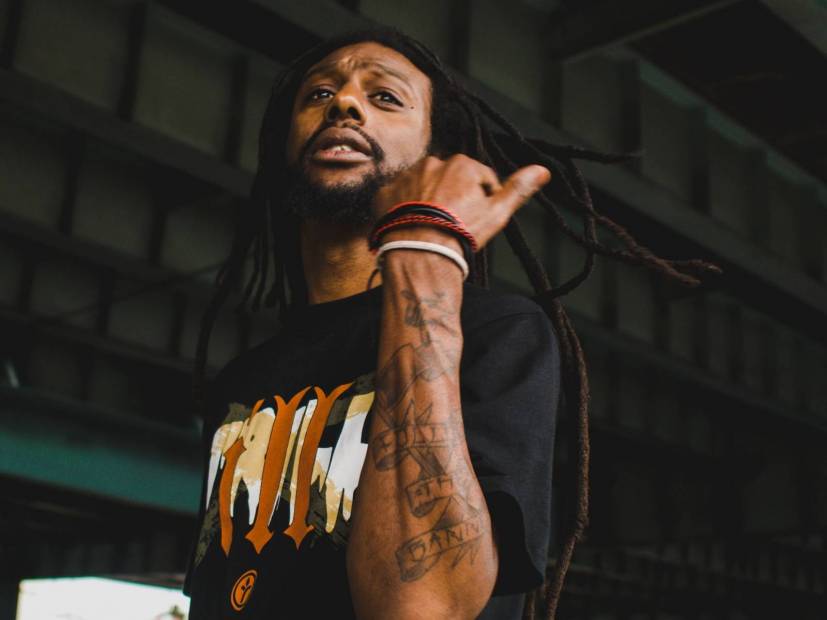 Austin, TX – Propaganda is one of the many performers taking the stage at HipHopDX’s “Reflect Greatness” SXSW Showcase on Wednesday (March 13).

Now, the multitalented artist is focused on finishing another book, recording his next album and a curriculum project. His latest album, Crooked, was released in 2017 and followed 2014’s Crimson Cord and 2012’s Excellent.

Okay imma go take a nap until the End of the World. #eotwtour kicks up feb 18. A Special tour bc it’s now @gungormusic Farewell tour! 🥪🌍🥪 cant miss this y’all link in bio 📸 one of them: idk i was just sent a folder. lol @debisthinking @ryansiowphotography or @eglenys Prophiphop.com

As Propaganda prepared to take the stage for his “Reflect Greatness” performance, he had some time to chop it up with DX about being an atypical Christian MC, his faith and how coming up with Project Blowed shaped who he is today.

HipHopDX: When did you first get into music? What was your household like growing up?

Propaganda: I got interested in music rather young, originally from the records my parents played then later on the backdrop of Hip Hop being birthed in Los Angeles. I just kind of knew I wanted to be a part of whatever was happening outside in the street.

DX: What made you want to become an artist?

I was kinda thrust into it. My first love was visual arts. That what I went to college for. But Hip Hop, honestly it was for the love. It was when I was finding it difficult to balance my job as a teacher with opportunities to pursue music that I found myself having to make a decision on what I was going to focus on.

DX: What’s the biggest misconception about being a “Christian artist?”

Probably that it’s a conscious decision to be “Christian artist” or that you have an excluding attitude. I’m from Los Angeles where there as no such thing as a Christian industry to exist in, let alone be a Christian artist. I came up at Project Blowed and Foundation, where all sorts of beliefs were displayed. Muslim, Rasta 5%, etc. You just spit your bars and didn’t think about being closed off to anyone. I was never shy about my beliefs. But neither was anyone else. I didn’t know what a Christian artist was until someone called me one.

DX: How do you combat those stereotypes?

It’s really something I don’t think about. I just try to make the best music I can. Honestly, I’ve been really on the fringe of Christian music due to my content, my political stances and people I fellowship with. I’m the child of a Black Panther, I’ve married a Latina, I come from a politically active background. In mainstream Western Evangelicalism, it’s kinda hard to parse out the faith from conservative patriotism. I am neither conservative or patriotic [laughs]. I never really been invited to the cool kids’ table, if you will. My album has been pulled from Christian shelves, and I’ve never played any of the biggest tours or festivals. Therefore, I personally don’t carry a lot of the baggage that comes with the name.

Now having said that, I’m not delusional. I know the rest of Hip Hop sees me as in the Christian rap circle, so some associations are just unavoidable. I have found a home among more progressive circles in the faith that do a lot advocacy in immigration, racial and gender equality and such. Again, I’ve never hid my faith, but I never really fit in the mainstream of Christian subculture, so I honestly don’t feel no pressure to carry the weight of taking down stereotypes. I guess I’ve just found, when people press play or come to a show, they just see and/or hear that I’m just not what they may think.

DX: What are you hoping comes out of this SXSW appearance?

I just enjoy performing. I’m hoping really to continue to connect with fresh people, cool artists and build the culture. The RMG guys — Derek [Minor] and Doc [Watson] — are legit my friends. I’m not on their label, but they have been one of my biggest cheerleaders. You don’t see that often. I’m hoping that our shows for sure make some noise, open some more opportunities for all of us! Maybe some tour slots with some bigger artists, maybe some placements, maybe some national radio. Who knows? Possibilities are endless!

Also, I’ve been somehow connected to HipHopDX for a while from when y’all covered my label, interviewed me at the Sunset Strip Music Fest, doing DX Live, etc. Both have been very good to me over the years. I’m really excited to just represent with y’all. I’m a believer that when the water raises all ships rise, so I’m hoping this show will do that for everyone. Hopefully , I can also could some new friends, get on some more shows and make some good connections.

For more information on Propaganda, check his website out here.