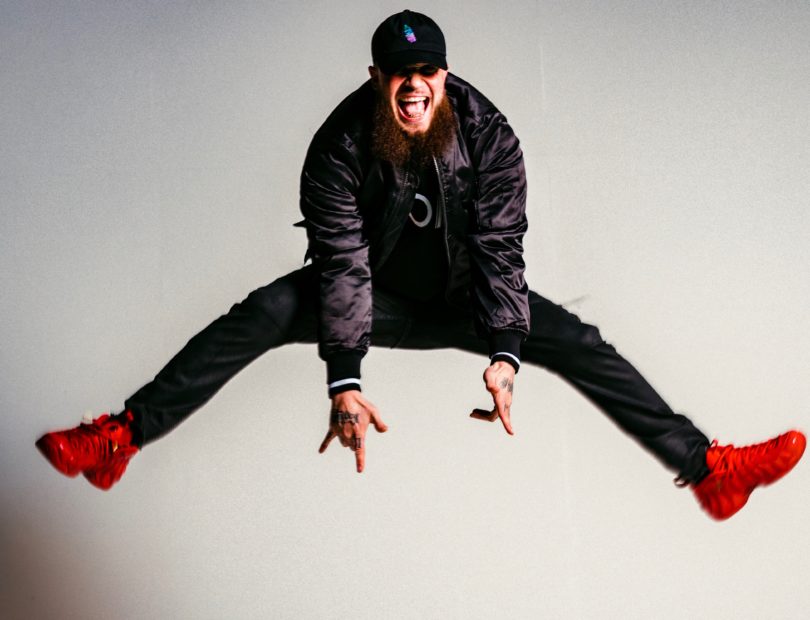 Los Angeles, CA – It’s no secret that the beat-making game is oversaturated. With platforms like SoundCloud, YouTube, and DatPiff, there’s no shortage of eager up-and-comers hustling their own work. So when a producer finds a way to break through all the noise, it’s undoubtedly impressive.

And Nonstop Da Hitman has been making beats since 2003 so he knows all about the hustle.

After later joining the Atlanta based collective 808 Mafia in 2014, his career started gaining momentum as he expanded his Rolodex of collaborators and artists. This past year, he experienced a new level of success when he got placements on Migos’ Culture II, Drake’s Scorpion, and Cardi B’s Invasion of Privacy. Fresh off his very first Grammy win forInvasion of Privacy, Nonstop sat down with HipHopDX in the middle of a busy workday at L.A.’s Hit Dr. Studio to discuss this new stage of his career, past controversies, and the enduring appeal of trap music.

Nonstop is a workhorse. According to him, on a “productive” day he makes ten to fifteen beats but on a “low day” it’s close to five. This unstoppable work ethic may stem from his early days as a self-starter. Growing up in Portland, Oregon, he felt unsatisfied with the music scene there. He started off making songs with his friends to pass the time. Though at first, he wanted to be a rapper, Nonstop says that Portland’s producers couldn’t deliver the beats that matched his vision. He recalled, “I heard better shit in my head than what was being played so I ended up making my own beats.” A close friend bought him a Triton keyboard with one condition — “we ended up butting heads because he bought it under the pretense that I was going to get out of the streets.” Even if he was “still doing that bullshit,” the gift was pivotal in making him catch the “music bug.”

From childhood, Nonstop was exposed to multiple types of music. His dad was the bassist for the Portland-based band Nu Shooz — famous for their 1986 hit “I Can’t Wait.” Despite being in and out of the picture, he educated him in various genres when he was around. His current sound has been impacted by this early eclecticism. He cites Dr. Dre and Scott Storch as influences and gravitates towards “soulful, funky types of music.”

It took a few years for Nonstop to start hitting his stride. In 2007, he got connected with Basement Beats who helped him get his first placement on Twista’s album Adrenaline Rush 2007 album with the banger “Wrist Stay Rocky.” Nonstop said he was about to give up completely on the industry until his Twista placement. Following that moment of success, he moved to Atlanta and later got connected with 808 Mafia in 2014 through Waka Flocka Flame.

Things kicked into high-gear these past couples of years. In 2018 alone, he made the beats for 2 Chainz’s “Land of the Freaks,” Migos’ “Made Men,” Cardi B’s “Drip,” and Drake’s “Elevate.” But with success comes controversy. Nonstop was caught in a bitter back-and-forth with his collaborator Cassius Jay. Cassius and Nonstop worked on a handful of beats together that later got high profile placements. When Quavo posted the production credits for Culture II on his social media channels, only Cassius’s name appeared as the producer for “Made Men.” On top of that, his tag was on the beat – making it seem like it was solely his work. According to Nonstop, Cassius was working as a “beat broker” and “put his name on there to make it seem like he was creating the record.”

Before the release of Culture II, during a drive to Nashville with Cassius, Nonstop noticed that his colleague had put his tag on another one of his beats. He had warned him not to do it again and that he had way too much experience under his belt to simply be his “ghost producer.” Back in September, Cassius told his own version of events in an interview with Producer Grind. And ultimately, it’s unclear whether something sinister took place or it was a misunderstanding. But regardless, Nonstop learned some sort of lesson because he has started tagging all of his beats moving forward. He stressed that it’s “all water under the bridge” and even if it was tainted by a dispute, he’s grateful for the opportunities that came from their partnership. Cassius connected him with PARTYNEXTDOOR which subsequently landed him on Drake’s Scorpion. Beef aside, their song “Drip” earned both of them the music industry’s most coveted trophy.

That’s not the only scandal Nonstop weighed in on. After winning Best Rap Album, Cardi B responded to haters who thought her award was undeserved. The “I Like It” rapper ended up deactivating her Instagram account due to the backlash. Nonstop said the negative reaction was “unwarranted” and that Invasion of Privacy “was an amazing body of work and she deserved every bit of [success].” He attributed the online hate to BET’s shady tweet and Nicki Minaj’s fans, jokingly describing Nicki’s zealous fan-base and Cardi’s followers as the “2019 Bloods and Crips from the 1980s.”

The Grammy win was a life-changing moment for Nonstop that he’s still struggling to put into words. He remarked how his phone couldn’t stop buzzing and “even homeboys called me crying.” To build off that momentum, he plans on enthusiastically taking part of the continuous transformation of trap music. Having been in the industry since he mid-2000s, he’s overseen the mainstreaming of the trap sound. And now, he’s venturing out of Hip Hop. In addition to working with Blac Youngsta and Lil Skies, the Atlanta producer is cooking up something with pop idol Noah Cyrus that combines trap beats and acoustic production. He advises aspiring producers to embrace collaboration, networking, and the unique opportunities of the internet era. In regards to the future of trap, he’s optimistic and stated. “I kind of attribute [trap music] as Black EDM. It’s club music. It’s not going anywhere.”

He played HipHopDX a beat that could very well be his next banger — the heavy rhythm blasted from the speakers, filling up the studio with his spirit of hard work and infinite potential.