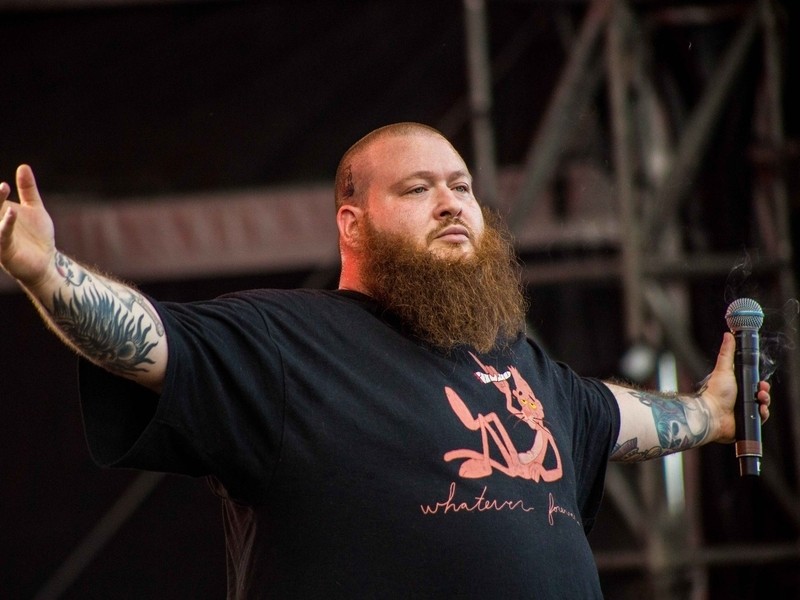 After unveiling the cover art and title track, Action Bronson has announced the release date for his forthcoming album, White Bronco. On Thursday (October 4), the F*ck, That’s Delicious host shared an Instagram photo announcing the project will arrive on November 1.

White Bronco will serve as the follow-up to last year’s Blue Chips 7000 and first project since jumping the major label ship.

Check out the album art above and revisit the track below.

[This article has been updated. The latest version of this article was published on September 22, 2018 and can be found below.]

After months of dangling the project in front of his fans, Action Bronson has come through with more details on White Bronco. On Friday (September 21), the (once again) heavily-bearded rapper returned with the album’s cover art and title track.

“IM PROUD TO SAY I CREATED THIS PIECE OF ART WITH MY MIND AND MY HEART,” he wrote in all caps. “IT WILL BE USED AS THE ALBUM COVER FOR MY INDEPENDENT RAP ALBUM TITLED *WHITE BRONCO* DROPPING EXTREMELY SOON.”

IM PROUD TO SAY I CREATED THIS PIECE OF ART WITH MY MIND AND MY HEART AND IT WILL BE USED AS THE ALBUM COVER FOR MY INDEPENDENT RAP ALBUM TITLED *WHITE BRONCO* DROPPING EXTREMELY SOON. THANK YOU FOR YOUR LOVE AND SUPPORT OVER THE YEARS ITS BEEN A WILD RIDE AND THE MOTHAFUCKA JUST STARTTTTTED.

White Bronco is expected to arrive sometime this fall and serves as his first independent project since bailing on a major label. Over the years, Bronson has expressed his frustration with his label situation, especially during the time he was trying to release Blue Chips 7000.

“Unless they can help you, they suck,” he said in a 2017 interview. “Unless you’re a humongous artist and you’re doing pop songs and hit songs, it really sucks. But for me, all I care about is putting out the project the way I made it.”

Listen to “White Bronco” above.

[This article has been updated. The original version was published on April 13, 2018 and can be found below.]

But according to a tweet from the Fuck That’s Delicious host, he’s flying solo. On Friday (April 13), Bronson announced he’s not only independent but also dropping a new mixtape called White Bronco.

“FREE AGENT,” he wrote. “NO MORE LABEL. INDEPENDENCE DAY. WHITE BRONCO TAPE COMING SOON. THANK YOU FOR YOUR BEAUTIFUL SUPPORT FOR SO MANY YEARS.”

FREE AGENT. NO MORE LABEL. INDEPENDENCE DAY. WHITE BRONCO TAPE COMING SOON. THANK YOU FOR YOUR BEAUTIFUL SUPPORT FOR SO MANY YEARS.

Bronson hit Twitter last year to vent about his frustrations with Atlantic/Vice Records, and claimed they were holding Blue Chips 7000 hostage. During his tirade, he implored people to remain independent.

But that’s all behind him now.

In addition to the White Bronco announcement, the weed-loving rapper also revealed he’s working on his next cookbook, Stoned Beyond Belief.

OOOO YEA I FORGOT IM WORKING ON A NEW COOKBOOK CALLED “STONED BEYOND BELIEF” MAKE SURE YOU STAY TUNED. FOR THE FIRRRRRRRRRRRE.

Last but not least, Bronson shared The Alchemist-produced track called “The Hopeless Romantic,” which is taken from the veteran producer’s Lunch Meat EP.

“NEW HEATER ALERT,” he wrote on Instagram. “FREE AGENT ALERT. “THE HOPELESS ROMANTIC” PRODUCED BY THE ONE AND ONLY LIVING LEGENDA @alanthechemist#fuckthatsdelicious.”

Listen to “The Hopeless Romantic” below.