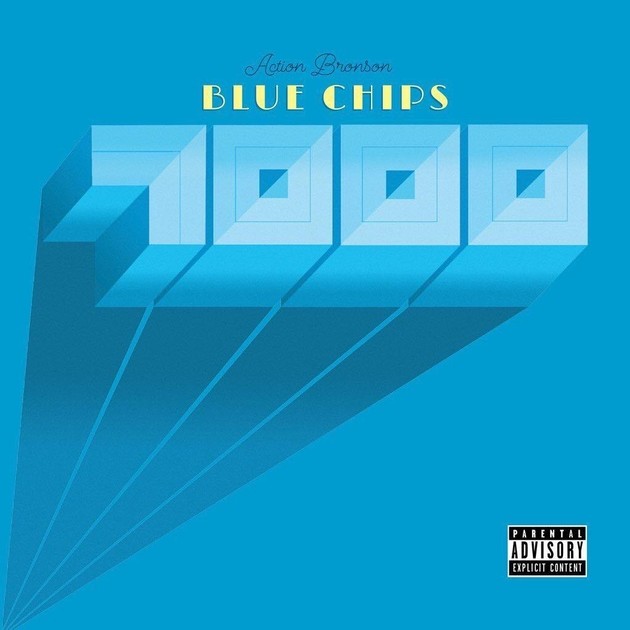 Action Bronson went down a bumpy road to release his Blue Chips 7000 album. He experienced a tremendous amount of headaches due to his predilection for samples, which is an endearing effort for traditional Hip Hop heads but a strenuous burden for those clearing them.

The obscure samples appeared to have derailed the project’s release for a while, yet publicly calling out his label and threatening to leak the LP somehow helped Bronson’s cause as the final edition of the Blue Chips series finally arrived.

And thankfully, it was worth the trouble.

Blue Chips 7000 is a return of sorts for Bronson. Over the past two years, he’s become more of television personality, with some people not even realizing he’s a rapper. He’s become one of the main faces of the fledgling VICELAND network with Fuck, That’s Delicious and hilarious off-shoots like Action Bronson Watches Ancient Aliens. The cable channel keeps adding to his plate too, so it’s impressive that he even has time to focus on music anymore.

It’s evident that rap is still the focal point for Bronsolino on Blue Chips 7000 though. There’s obviously a lot of TLC involved in the creation of this project. Deep dives into crate digging with producer pals Harry Fraud, Party Supplies and The Alchemist result in an array of vibrant and eclectic sounds.

His pen game is on point too with a cavalcade of rewind-worthy wordplay distilling his comedic persona. “I’m qualified to speak for my attorneys/ Address the jury in a Shaq jersey (black one)/ This is one night only, Dragon vs. Phoenix/ I think I’ll fuck around and throw Aladdin on the remix,” he raps on “Hot Pepper.”

Bronson’s music isn’t completely detached from his new career path with his album playing out like an audio version of a new TV show for VICELAND. Random audio clips used as intros on tracks like “Wolfpack,” “Hot Pepper” and “9-24-7000” give it this feel.

“La Luna” is the most dramatic example, using the concept of Bronson rapping over a car service’s on-hold music. For better or worse, the phone call style plays out for more than half of the track before it kicks in proper. It’s a quality cut, but it feels like it just found its groove by the time it comes to an end.

Brevity is a major aspect of Blue Chips 7000. “Chop Chop Chop” is by far the longest track on the album at just over four minutes. It helps give the LP a lot of replay value, but sometimes it comes across like viewing an unfinished painting. “Bonzai” and “My Right Lung” leave the listener wanting much more, each providing barely two minutes of slick bars and retro vibes.

When Bronson does find that sweet spot of timing, it works gloriously. The guitar-laced “The Chairman’s Intent,” complete with violin breakdown in the middle, is top notch with lines like, “Two pumps from the inhaler got me feeling like Lawrence Taylor.”

Griselda Records’ Daringer, one of the new contributors on the production side, gets Mr. Wonderful back on the soulful tip with the standout “The Choreographer.” The smooth backdrop spurs Bronson to deliver the most entertaining hook on the LP. “I’m the man right now/ I got the plan right now/ Fuck that, I got the world in my hand right now/ I should be somewhere sunny getting tanned right now,” he raps.

Blue Chips 7000 is a triumphant moment for Action Bronson the rapper, re-establishing his position as the court jester of Hip Hop. It’s unabashedly fun and a refreshing celebration of sample-based beats in a genre largely moving away from them. There’s no deep thinking or worldly insight here, but Bronson has never tried to be that artist. He sticks to what he does best and succeeds in doing so.