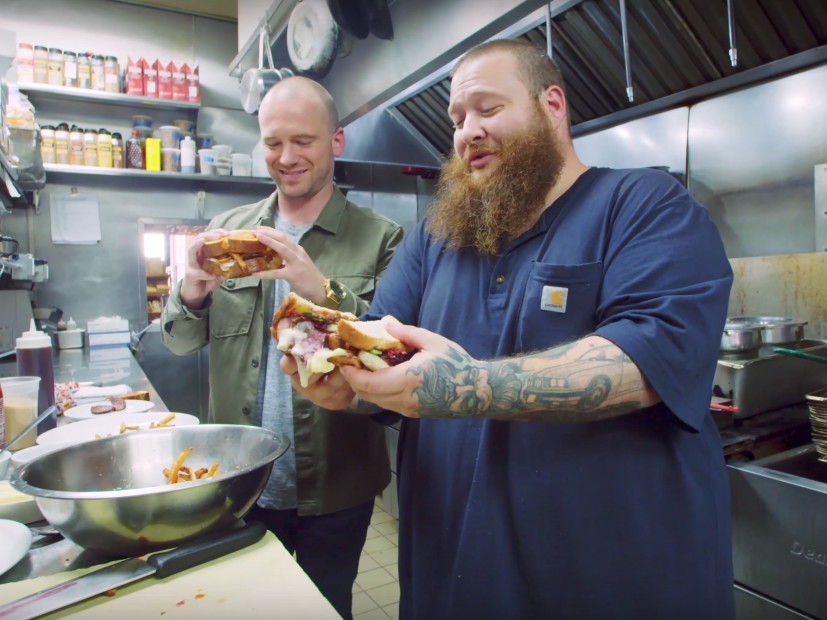 Bronson, who was a chef in New York before he made it in the rap game, shared his philosophy on what makes the perfect sandwich: “It’s the bread, it’s the meat, it’s the thing that goes on it, it’s the slather that makes everything moist… It’s the hint of this, it’s a touch of that. There’s really no one way to make a sandwich.”

Bam Bam Baklava prepared a chicharrón using a recipe from his own Fuck That’s Delicious cookbook, which hit the shelves Tuesday (September 12). He used a slice of pork belly bacon in sauce made from jalapenos, raspberries and blackberries, as well as robiola bosina cheese, between slices of white bread.

The video shows the exact way to prepare the chicarrón before the moment of truth, where Mario Batali bites into it… “The robiola bosina is part of my heartstrings, the blackberries remind me of my childhood … You’re looking really, really good. I might say ‘Fuck That’s Delicious.'”

It was then Evans’ turn to be judged. The Hot Ones host had prepared a sandwich of salami, turkey, “Primanti Brothers-style fries” and swiss cheese between challah bread.

Batali revealed that he “would be very happy to eat either of these sandwiches.” As for who he crowd champion? Check out the video below to find out.