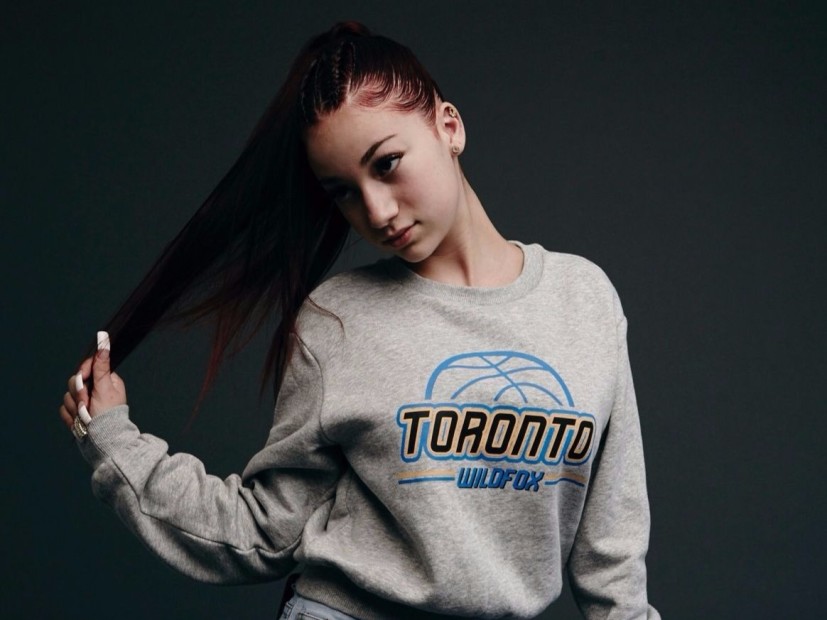 When the news started to spread that Danielle Bregoli scored a record deal with Atlantic Records under her Bhad Bhabie rap moniker, it sparked outrage among the most enthusiastic Hip Hop puritans. How did the rebellious 14-year-old who shot to fame after her Dr. Phil appearance and subsequent “Cash Me Ousside, How Bow Dah” meme pull this off?

The answer: they came looking for her.

Two of her singles — “These Heaux” and “Hi Bich/Whatchu Know” — have already hit Billboard’s Hot 100 chart much to the surprise of, well, everyone. But there’s a few things people should know about Bregoli. First of all, she hates being called “The Cash Me Ousside girl” and secondly, fame wasn’t something she sought out.

As Bregoli explains, this isn’t something she asked for.

“What would you do if you were put in the situation I was?” she asks. “And your mom put you on a TV show and you came home from a program, and you didn’t even know the latest music that was out — didn’t know anything. Your mom gives you your phone and you look on the Instagram explore page, and there’s a million pictures of you? Every other picture is a picture of you with something saying, ‘Cash me ousside’ on it and you don’t even remember that you said that. Then all of sudden somebody calls you and they’re like, ‘Hey do you rap, do you sing?’ And you say no, but they wanna manage you and say, ‘I think we can make something out of you.’

“Then they fly you out to Los Angeles and they basically put you in a little Airbnb, and they take you to meet with a record label because they just want to meet you,” she continues. “They think that you can be an artist. They ask you if you like music, you say, ‘Yes.’ They say, ‘Okay we want to give you a record deal. You sound good.’ Are you not gonna take that?”

On September 17, the day the Atlantic Record deal was announced, Bregoli fielded countless negative tweets bashing her music, including one from actor Seth Rogen. She snapped right back in typical Bregoli fashion and tweeted at him, “I know someone believed in this fat stoner when he was yung.”

She has an idea on why people reacted so strongly.

“I think it was a more like, ‘For what? Why? How could that happen?,'” she explains. “But I wanted to pursue music. I wanted to start doing music and I mean, I was told by a lot of people Atlantic is a good label to go with and they wanted me so I was like, ‘Okay.'”

Her entrance to the music business basically started with fellow Floridian Kodak Black, who featured her in his “Everything 1K” video. The collaboration happened totally by chance as she was doing a photo shoot and listening to “Everything 1K” in the background.

“I was just trying to do a photo shoot for some clothes one day,” she says. “We were playing music and shit, and my manager was like, ‘Look at the camera and start rapping the song.’ We ended up doing that and it kind of became a music video and then pretty sure someone showed Kodak it. And Kodak was like, ‘Let’s take that.'”

Bregoli is a Hip Hop fan, but admits she got into music by listening to country with her grandparents as a child.

“I’ve always been like really into music,” she says. “I’ve always loved music. I mean I’m not gonna lie, I started off listening to country music because my grandparents listened to it. My whole family is kind of like weird. My Aunt Donna listens to Bon Jovi and a lot of like rock and metal type music. And then my Aunt Nancy, she listens to country and then my grandma listens to country. But my mom and my cousins all listen to rap and obviously I’m my mom’s kid, so I’m with her more. So ever since I was younger, I’ve heard different types of music and explored different types of music.”

When asked if there was a lack of positive female role models in Hip Hop, Bregoli responded with a breakdown of the various women in different sub-genres of Hip Hop who she thinks are leading the pack.

“I think of it as the queens and princesses of different varieties,” she explains. “When you say rap, there’s a lot of varieties of rap. There’s the poppy rap where it’s kind of rap but kind of pop. There’s the underground rap like the SoundCloud rap and then there’s the real rap like JAY-Z, Kanye West and stuff like that. Then there’s the Travis Scott, Playboi Carti, A$AP Mob kind of rap that’s like a mix between real real rap, commercial rap and underground rap.

But her goal isn’t to be the next Nicki Minaj.

“Honestly, I don’t wanna end up like that,” she admits. “I want to be an artist. I don’t want to just end up like going into the studio and doing what I have to do, and leaving and not enjoying getting the song done because I need be able to put this out. Or I’m more worried about my perfume that’s coming out than my next single.”

For now, Bregoli is optimistic about the future. She just released another video for “I Got It” and has more coming out soon. She just hopes her “Insta-fame” is something that is sustainable. When she found out “These Heaux” and “Hi Bich/Whatchu Know” hit the chart, she was pleasantly surprised.

“I care about people listening to my music but to an extent,” she continues. “If it’s the haters then no, but if it’s like a fan or stuff like that then yeah, but if it’s just someone who’s mad because they’re sitting on their couch all day eating Hot Pockets and watching Wheel of Fortune every night, then I don’t care.”

Love her or hate her, Bhad Bhabie is here for now.