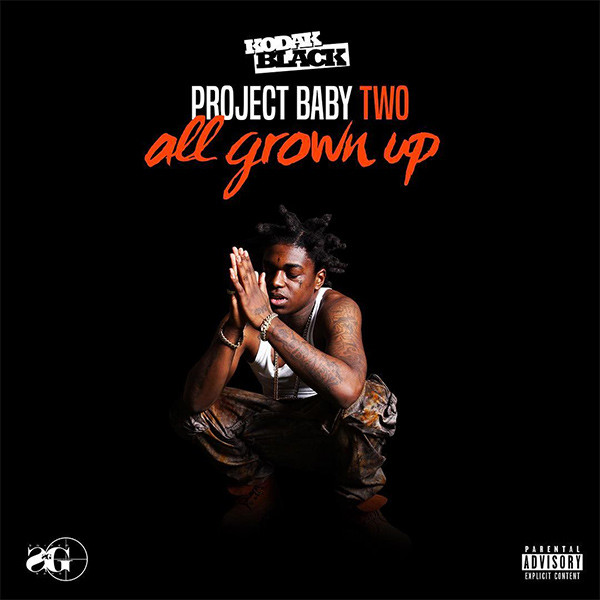 For a guy who has spent much of his young adult life behind bars, Kodak Black has released his fair share of music. At just 20 years old, he’s had one studio album, five solo mixtapes, a gold RIAA plaque, several Billboard Hot 100 placements and millions of streams.

Among these decorated projects was last summer’s Project Baby 2 mixtape, which despite being one of his weaker offerings, was seemingly special enough for the Florida native to re-release it as Project Baby 2: All Grown Up (Deluxe). This beefed-up version has eight new tracks and a release date only three months removed from the original tape’s drop.

First up on the added tracklist is “Codeine Dreaming” (featuring fellow face-tat fanatic and former desired boxing opponent Lil Wayne), which comes in as one of the best tracks on the 27-song project. Ben Billions and Infamous are largely to thank for the song’s spacey catchiness but Kodak and Weezy both get busy with codeine-obsessed bars.

Later, Kodak tags in Cash Money super villain Birdman for “Projects,” which is far less exciting of an offering and not just because of Birdman’s Dr. Seuss-level rhymes. C-Clip Beatz and Dyryk serve up an elementary-level trap beat that leaves Kodak delivering matching monotonous bars.

Furthermore, on “Cognitive” Kodak is practically ad-libbing his way through the entire three minutes with almost zero enunciations and zero impassioned murmurs. If listening to Project Baby 2 (Deluxe) in its 27-song entirety, this song becomes non-existent and serves no other purpose than to be another notch on the tracklist.

“Rugrats” has a bump in concept, playing on the baby/rugrat angle but the constant vocal slur is hard to digest. There is an extenuating finish with “About You Without You” which showcases some witty character development with lines like “I’m wild but I ain’t doing no more wildin’ gotta chill/ Sorry I already made my mind up for real/ Lowkey I be vibin’ cause my family need me here/ But god I gotta keep the fire on conceal/ Yeah but I’m wiser now but I ain’t drinking beer.”

Kodak’s appeal has always been his hood poetics and less-than-audible melodies but at a certain point simply moaning and groaning on a beat doesn’t cut it, especially when the emotional punches are pulled.

On previous cuts like the hypnotically melodic “Tunnel Vision,” the triumphant “Blood Sweat Tears Revenge” and the deeply contemplative “Can I,” Kodak at the very least exudes a high level of raw emotion and picks up the slack his unimaginative rhymes leave on the floor.

Too many times on Project Baby 2: All Grown Up (Deluxe), whether consumed as a full 27 song mixtape or simply as the eight song deluxe portion, Kodak can barely deliver the best part of his artistic output.