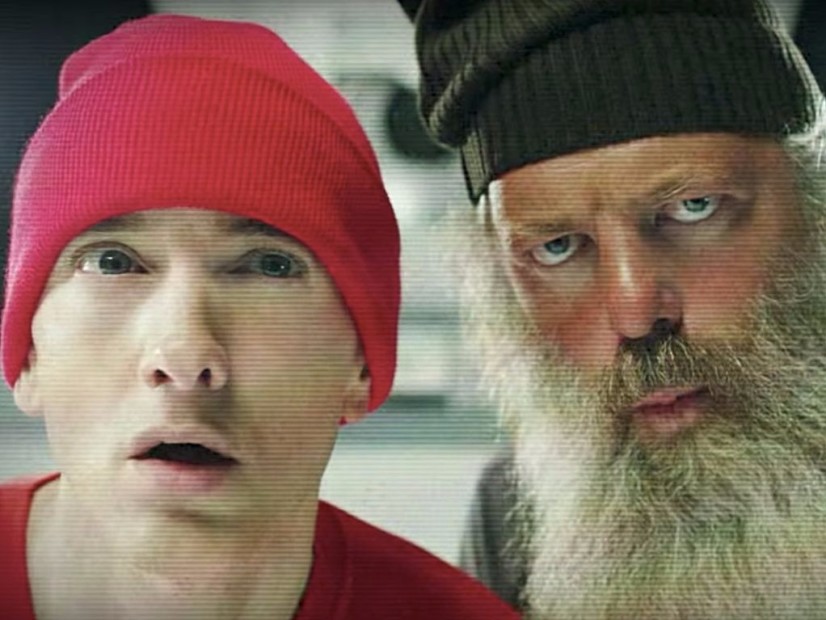 Considering Slim Shady is the first guest on Broken Record, the nearly 15-minute podcast coincides perfectly with the new song’s release, which is also produced by Rubin. During the interview, the Detroit rap goliath explained the meaning behind the emotional track.

“It’s a very moral song,” Em says. “It’s mortality, not being Superman and what if I can’t come up with the best shit I wrote every single time?”

Earlier in the episode, Rubin talked about a conversation he was having with Em about the rise of mumble rap. Shady’s penchant for well crafted, descriptive bars has him understandably  “frustrated” with the current incarnation of Hip Hop.

“For him, it’s a little bit of a culture shock because there’s a new wave of Hip Hop that’s not really what he’s about, so he was just talking to me about how that felt,” Rubin says. “I could see he was frustrated by it.”

Rubin also touched on his songwriting process and explained that working with Eminem is unlike working with any other artist.

“He’s fanatical to a point that I don’t think I’ve seen in anyone before just through his attention to deal,” Rubin says. “He has a perfect memory of everything about the music and he gets inside of it, and he writes to whatever is good or bad about it.”

Mr. Mathers then admitted he’s been obsessed with studying Hip Hop and the greats who came before him. Mostly, he opens about Tupac Shakur and how much he learned from listening to his music.

“I’ve been a student of Hip Hop and I’ve always studied rap, and one of the things I learned from Tupac — I don’t know how — he just always knew the right words to say on the right chords,” Em explains. “I remember he said, ‘My broken down TV/ Showed cartoons in my living room’ on ‘Unconditional Love,’ a song he had. I was like, ‘Oh my god, he could have said that on the bar before it and it wouldn’t have meant as much, but he said it right here, where the chord got sad.

“I studied that so much and I was like, ‘Oh my god,'” he continues. “He was so genius at doing that. He never said the wrong thing on the wrong chord. Listen to ‘Dear Mama.’ Listen to every single thing — every single thought, every single word, every single bar was so in place of where it should be. He was just so smart about picking his beats. 2Pac always said, ‘Feel me.’ You have to feel him, not just hear him.”

In terms of who has influenced Eminem throughout his life, his list is long. He rattled off several names of some of his favorite artists, including Ice-T, Public Enemy and Rakim.

“When I first got into to Hip Hop, I started with Ice-T,” he says. “And N.W.A came out, and Audio Two … Kool G Rap, Big Daddy Kane, Masta Ace, the whole Juice Crew, Beastie Boys, 3rd Bass — everything that was good Hip Hop — Treach, Naughty By Nature, the whole Flavor Unit. There’s so many that I learned from and just studied — Biggie and Big L, Poor Righteous Teachers, YZ, Rakim, KRS-One, Wu-Tang, Leaders of the New School, JAY-Z, Nas … Public Enemy. I didn’t say Public Enemy. I meant to say Public Enemy.”

He adds, “Oh shit I forgot Run-DMC. Why did I forget Run-DMC? Anybody I forget, if I’m in an interview or something, I’ll start thinking about it afterwards or something. Just wanted to say that. Run-DMC. Amazing. Rick Rubin. Amazing. DJ Double R. Thank you, man.”

Listen to the full episode above and cop it here.