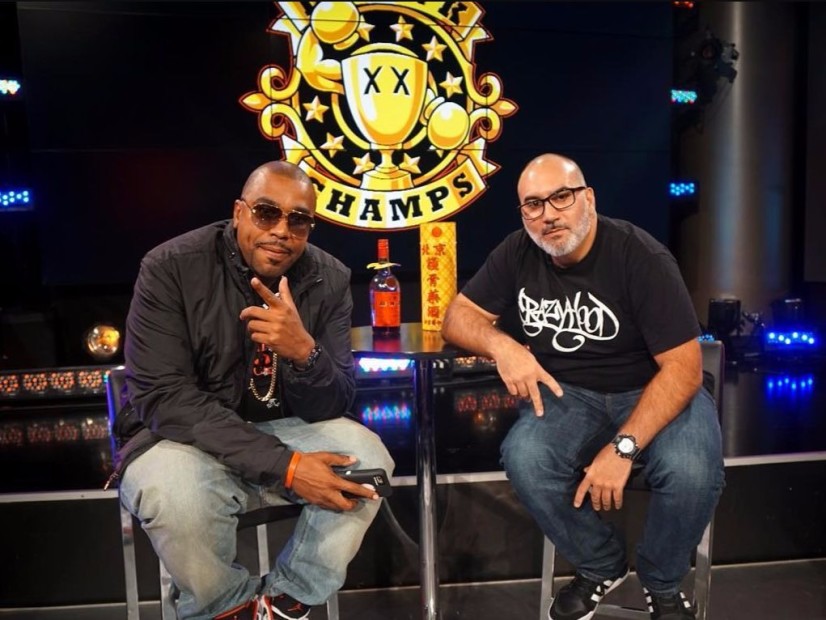 New York, NY – After the success of the initial six episodes, REVOLT TV’s Drink Champs has been renewed for a second season. Hosted by Queens rapper N.O.R.E. of Capone-n-Noreaga and Miami’s DJ EFN, the show was initially a popular audio podcast, but once REVOLT got involved, it was transformed into a video series.

Essentially, the idea is to pump each guest with enough alcohol to get them talking, which can result in a healthy amount of unpredictability. But there’s a few ground rules to be considered for the show.

“We want to see if this person is a legend,” N.O.R.E. explains to HipHopDX. “What we call a legend is anybody that has been around for 10 years and is continuing they grind. We did interview Amber Rose and people were saying she’s ‘not a legend,’ but to me she is. Plus, we needed females. It’s a very guy-based show, but we have girl fans and we wanted to please them.”

The new season premiered on Thursday (July 27) and featured Hip Hop pioneer LL Cool J, an artist who unquestionably meets their criteria. After years of wanting to ask Mr. Cool James what “pink cookies in a plastic bag” meant from the 1993 LL Cool J track “Pink Cookies In A Plastic Bag Getting Crushed By Buildings,” N.O.R.E. finally got his chance.

“I’m always a fan of these guys,” N.O.R.E. says. “Some of these guys came out the same time as me and some came out before. Just because we make similar music and we’re peers doesn’t mean I’m not a fan. I get to ask LL, ‘What is pink cookies in a plastic bag?’ I grew up in Queens and I had no idea that even made sense. I would lie like I knew. But it comes from me sincerely wanting to know … I just want to know.”

“We still don’t consider ourselves journalists,” DJ EFN adds. “We’re doing something journalists do, but the success of the show is that we’re not journalists. It’s just basically doing it with cameras and microphones — we get drunk and talk shop. That’s really the goal.”

LL Cool J explains what “pink cookies in a plastic bag means” in the clip above.

There are some occasions when the particular guest doesn’t drink, is in recovery or might engage in certain religious practices, so N.O.R.E. and EFN make sure to be respectful of each person’s individual situations. For example, Ice-T was a guest during the first season and he traditionally doesn’t indulge, but it doesn’t mean N.O.R.E. didn’t at least try with the Body Count frontman.

“I’ve known Ice-T for quite some time,” N.O.R.E. says. “I’ve been trying to get him drunk for the past 13 years and I have not been successful [laughs]. We knew with Ice-T and Joe Budden, who’s a recovering addict, so that’s not funny to pressure them. With Joe’s situation, it’s not funny to like pressure him.

“French Montana was on during Ramadan [Muslim holiday], so we passed on him because we didn’t want to offend anybody or anybody’s religion,” he continues. “But that’s the whole basis of our show — to try to get these people drunk. Even if they willing to drink, we want them to drink more than they’d be willing to go. But for people like Ice-T, who really doesn’t drink, and Joe Budden, we work around it and drink for them. Like Royce Da 5’9 is supposed to come up and he’s also a recovering addict, so we will be conscious of that.”

Some of the wildest episodes include one with KRS-One, Sean “Diddy” Combs, 50 Cent, and Snoop Dogg. A few scenes from one particular episode haven’t made it out of the editing room — at least not yet.

“One of the highlights of my whole life was seeing KRS One drink a Mai Tai — many Mai Tais,” N.O.R.E. admits. “That was the highlight of my life. But the wildest one is the unedited Puff Daddy [Diddy] episode in my opinion. We got a Free the Puff Daddy episode, but what people saw was definitely the edited version.

“The guy’s worth a billion dollars, so the things that we were talking about wasn’t proper, but we didn’t care — we went there,” he continues. “If we ever could release the unedited version of the Puff Daddy, man … It was hard, it was gangster. Obviously the 50 Cent episode. He’s known for not being a drinker and for being on point, so for him to let his guard down and talk about anything was crazy. But it [the Puff Dady episode] will see its day. I think it could.”

“Same for me,” EFN adds. “Another notable one for me is Snoop because even though I don’t smoke, it felt like I was smoking just by being in the room that day. He was amazing.”