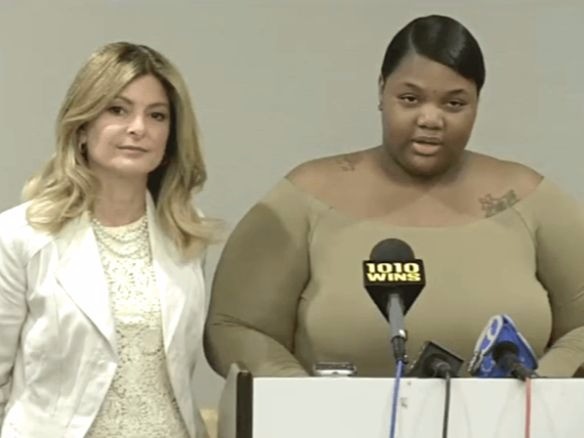 According to court documents obtained by TMZ, all three of Usher’s most recent accusers allegedly had sex with the illustrious R&B singer.

Bloom said they participated in the sexual activity with Usher “because Raymond [Usher] was a revered celebrity in their eyes who they believed could be loved and trusted.”

One of the plaintiffs, 21-year-old Quantasia Sharpton, said Usher picked her out of a crowd during a concert on her 19th birthday and later had sex with her, but she admits she did not test positive for herpes.

Bloom explained all three of her clients, including one man identified as John Doe, have suffered severe emotional distress, depression and anxiety. She alleges Usher failed to inform them he was infected with herpes.

Although the lawsuit reportedly doesn’t specify the amount of damages, the plaintiffs are asking for punitive damages as well as a judge’s order requiring Usher to disclose his alleged herpes diagnosis before any further sexual activity.

Usher is already facing another $20 million lawsuit filed by an anonymous woman who claims he infected her with the virus. The controversy started to unravel after leaked court documents showed Usher had paid a woman $1.1 million after allegedly infecting her with the STD.

Bloom has recently represented celebrities such as Blac Chyna and Kathy Griffin.

Watch the full conference above.

(This article has been updated. The last update was published on August 5, 2017 and can be found below.)

As if things couldn’t get any worse for Usher. Now, two women and a man are reportedly plotting to file a lawsuit against Usher Raymond IV for exposing them with the herpes virus.

Celebrity attorney Lisa Bloom is reportedly filing the suit on Monday (August 7) in California. Subsequently, she plans to hold a news conference in New York City to coincide with the filing. While two of the accusers will remain anonymous (as John and Jane Doe), one of the women will appear at the conference.

Bloom alleges Usher failed to inform all three individuals the R&B mega-star was carrying an STD before having sexual contact with them. They also claim to have had relations with Usher at some point after 2012, around the time he was allegedly diagnosed.

The controversy kicked off in July when leaked court documents showed Usher paid an unidentified woman $1.1 million after infecting her with herpes.

(The original version of the article was published on July 25, 2017 and can be found below.)

The woman who accused Usher of exposing her to an STD and plans to sue the singer for $10 million recently upped her demand to $20 million after she tested positive for herpes on Saturday (July 25), according to TMZ.  The unidentified woman, who filed under Jane Doe, said she got tested immediately after learning Usher admitted in court docs he’s carrying the herpes simplex 2 virus.

The woman claimed she had unprotected sex with Usher in a New Orleans hotel room earlier this year. She is now suing Usher Raymond IV for $20 million.

Usher has not addressed any of the allegations publicly.

(The original version of the article was published on July 22, 2017 and can be found below.)

Just when it seems like things couldn’t get any worse for Usher Raymond IV, another woman has come forward claiming the “Burn” R&B singer exposed her to an STD earlier this year. The unidentified woman has filed a $10 million lawsuit for negligence, battery and emotional distress, according to TMZ.

The suit, filed by a Jane Doe, says she and Usher hooked up in her Atlanta home on April 16. She says she performed oral sex on him and they eventually had intercourse, but she says he wore a condom.

In the legal documents obtained by TMZ, she admitted they then had unprotected sex 12 days later in a New Orleans hotel room. While the woman doesn’t claim to have contracted the virus, she’s “concerned” and claims she wouldn’t have had sex with Usher had she known he was infected.

The news comes just a few days after the world was privy to some leaked court documents alleging Usher paid a celebrity stylist $1.1 million after giving her herpes sometime in 2011 or 2012 through unprotected sex. After Doe saw the reports, she evidently took action.

Usher’s current wife, Grace Miguel, who he married in 2015, posted an Instagram photo of them together as recently as five days ago.

Usher’s ex-wife Tameka Foster also chimed in on Instagram earlier this week and had a stern warning for anyone trying to talk to her about her ex-husband’s personal problems.

“Do not come on my page discussing rumors or adult people that have NOTHING to do with me,” Foster captioned the photo. “I have been divorced 8 years… Some issues are not my business… ex husbands, ex friends, bitch-maids, snakes, hoes, characters, etc. Not my circus, not my clowns … I’m good and my health (Everywhere is great well my right knee hurts and I need reading glasses but otherwise I’m awesome and enjoying the sun. Miss me with other grown folks crazy gossip.. Not my business at all. I’m living my bestest life. Always. Miss me with the bullshit.”

Do not come on my page discussing rumors or adult people that have NOTHING to do with me. I have been divorced 8 years… Some issues are not my business… ex husbands, ex friends, bitch-maids, snakes, hoes, characters, etc. Not my circus, not my clowns … I'm good and my health (Everywhere is great??), well my right knee hurts and I need reading glasses but otherwise I'm awesome and enjoying the sun. ?Miss me with other grown folks crazy gossip.. Not my business at all. I'm living my bestest life. Always. Miss me with the bullshit. Thank you. Gwan na ??

For now, Usher has remained silent.