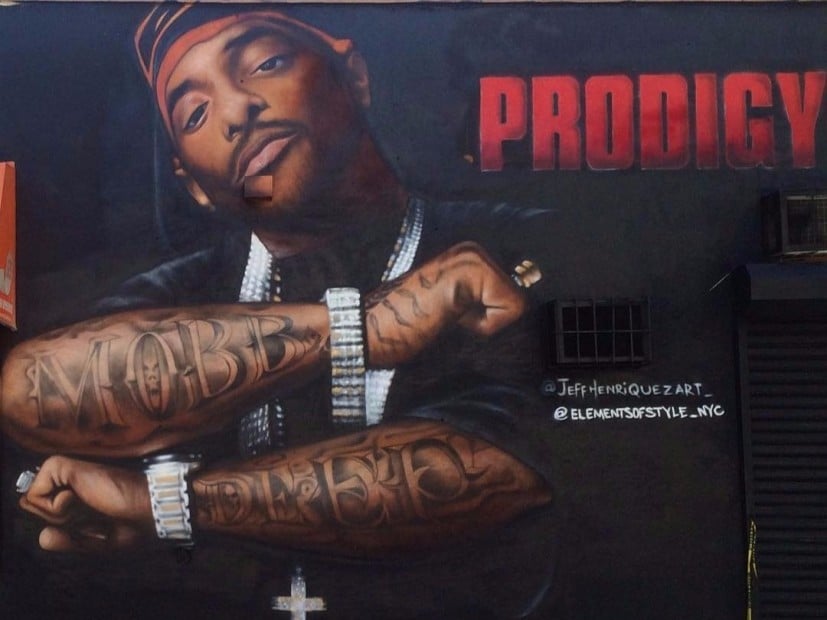 Queensbridge, NY – A Queensbridge mural created to honor the late Prodigy has been permanently removed after vandals defaced it on two separate occasions. Photographer Raphael Gonzalez, who has been documenting the work of the mural’s creators, shared a picture of the art’s former home and commended the artists for their efforts.

“The #Prodigy tribute is no more and has been buffed black,” Gonzalez wrote on Instagram. “#queensbridge Much respect to @jeffhenriquezart_ and @elementsofstyle_nyc for their dedication and hard work, thy got a lot of love and respect from the community. True artists.”

The #Prodigy tribute is no more and has been buffed black. #queensbridge Much respect to @jeffhenriquezart_ and @elementsofstyle_nyc for their dedication and hard work, thy got a lot of love and respect from the community. True artists. #ripprodigy #prodigymobbdeep #mobbdeep #jeffhenriquezart #elementsofstylenyc

News of the mural’s unfortunate removal first emerged when Frankie Cutlass, a producer who has worked with Mobb Deep, shared a video of its eradication on Monday (July 10). View the footage below.

The massive mural street artists Jeff Henriquez and Eli “Eli Eos” Lazare painted in honor of the late Mobb Deep MC Prodigy was destroyed by vandals over the weekend, just hours after it was unveiled. Henriquez and Lazare worked diligently to repair it and after 15 hours of work, revealed the finished product (again). But it didn’t last.

The mural, which is located on 13th Street and 40th Avenue in New York City, has been defaced once again, this time with a giant splash of red paint littered across the Queensbridge Hip Hop legend’s face and right arm.

I hate starting days like this but, the #Prodigy tribute wall in #queensbridge was vandalized again last night. This time with red paint. A lot of hard work went into this wall and it's a shame that it can't be respected along with the dead. @jeffhenriquezart_ x @elementsofstyle_nyc #ripprodigy #prodigymobbdeep #mobbdeep #licstreetart

While many people are outraged at the blatant disrespect, Henriquez likely isn’t surprised. In an Instagram photo he posted to his account on Sunday (July 9), the artist wrote: “Sadly I expect my wall to get hit again. But regardless. The statement we made today represents the resilience of a community and a deep love for one man. Im honored to have been asked to do the piece.”

Whether the mural will be resurrected a second time or not remains to be seen. For now, check out the photo above.

THE RESURRECTION. The hood love is strong! 15 hours in one shot to bring back our fallen hip hop general. Big thanks to the homie @elementsofstyle_nyc for keeping things on point. A special thanks to my very good friend @djhotday who pulled up the truck and kept the lights on until the very last can. And to all the positive souls brothers and sisters djs tv types and local people. I thank you from the bottom of my heart. Sadly I expect my wall to get hit again. But regardless. The statement we made today represents the resilience of a community and a deep love for one man. Im honored to have been asked to do the piece. Now.. Lets keep this muthafucka movin… ✊?#prodigy #ripprodigy #queensbridge #newyork #infamous #streetart #urbanart #outdoorart #publicart #montanacans #tattoos #sprayart #spraypaint #realism #portrait #muralart #mural #jeffhenriquezart_ #elementsofstyle #graff #beautiful #stunning

(The original version of the story was published on July 8, 2017 and can be found below.)

Less than 24 hours after a mural dedicated to Prodigy was unveiled, vandals evidently decided to destroy the artistic tribute to the late Mobb Deep MC. Close friend and collaborator Cormega posted a photo, which has since been deleted, to his Instagram account showing white paint splattered across Prodigy’s face with a caption that read: “This is some sucker shit.”

The mural was painted on the wall of the Urban Upbound building on 13th Street and 40th Avenue, across the street from the Queensbridge Houses in New York City where Prodigy spent part of his youth.

Artists Jeff Henriquez and Eli “Eli Eos” Lazare, who created the mural over a course of five days, have yet to react on social media, but many others have taken time to express their outrage at the blatant vandalism. It’s unclear if the NYPD is investigating it as a crime.

Prodigy passed away at the age of 42 in Las Vegas last month after complications with sickle cell anemia, a condition he’d fought his entire life.

Destroying Prodigy's mural hours after it was finished?…bunch of disrespectful cowards

It's so fucked up that someone would do that to prodigy's mural! Smh I'm livid! #RIPProdigy

What they did to Prodigy's mural is distasteful.

whoever did this to prodigy's mural needs to be arrested. RETWEET so a snitch can snitch pic.twitter.com/savRvue3SY

What have I been sayin ALL week???? The fake and snakes wait to flip on you. Even after u gone they STILL hate. If you ever have fake love or malicious feeling towards me and mine. Keep ya distance for life. #ripprodigy #greatness #prodigymural #nyc #queensbridge #queens #newyorker #rapper #recordingartist #mobbdeep #realtalk #fakes #snakes #fakelove #beautifulart #petty #artgallery #graffitiart #rip #prodigy #mobb #infamous #rappers #thehateisreal #thereal #indie #haters #legends