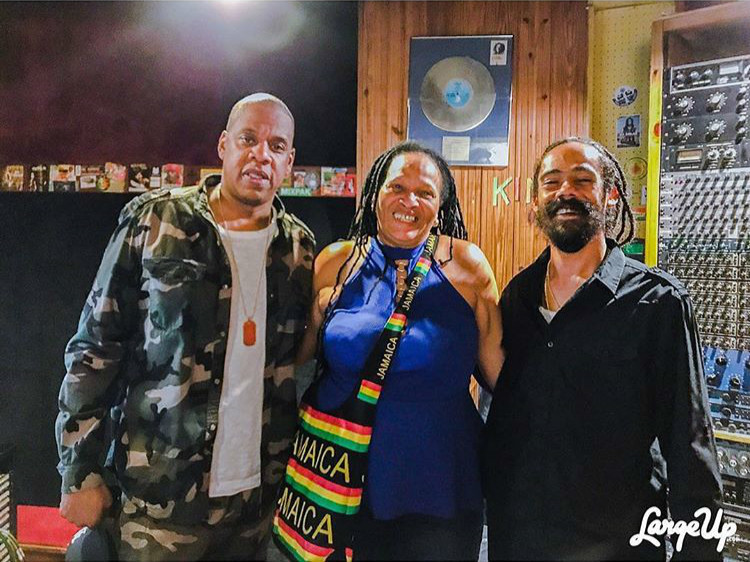 While any information about new Jay Z music seems to be speculative these days, we can confirm at least one of the rumors is true.

Damian “Jr. Gong” Marley spoke with Billboard about linking up with Hov during the mogul’s recent trip to Jamaica and confirmed that they did, in fact, work on new music.

“We did some work in the studio recently and he wanted to come to Jamaica to get a tour of the place,” Marley said. “… I did some work with him for some stuff that he’s working on. I’m not really sure of the details of his project in that sense, but we worked on some music together. I’ve been a fan of his music since he came out. We’ve never done any musical work together. So that was a joy to finally work together musically.”

Marley previously did an album with Nas and has his own Stony Hill LP coming out in July.

Jay Z hasn’t released an album since 2013’s Magna Carta … Holy Grail, but is reportedly working on a new LP. He also has a project called 4:44 in the works that nobody really knows what it is (except for Vic Mensa).

Jay Z isn’t the type to announce his moves to the world, but his visit to Jamaica late last week has sparked a bevy of chatter regarding his time there. Hov made his way to the island’s capital city of Kingston on Thursday (June 8) to connect with Damian “Jr. Gong” Marley at the famed Tuff Gong studios, igniting rumors that the pair might be working on new tunes together.

The prospect of the dancehall star and son of Reggae legend Bob Marley working with the Brooklyn veteran MC isn’t a far-fetched notion, as Damian Marley recorded a similar joint project in 2010 with Nas in the form of Distant Relatives. In a report from DancehallHipHop, the business mogul born Shawn Carter hobnobbed with fans and local artists alike, including icons like Sister Nancy and Junior Reid among several others. The site also wrote that a source informed them that the two artists recorded tracks at Tuff Gong.

A photo of Jr. Gong, Sister Nancy and Jay Z was posted across social media, and other images of the rapper walking among the Kingston massive have made the rounds. There have been rumors that Jay Z, now 47, is currently working on a new project. But the 4:44 announcement last week seems to be a movie while fans await a new album.

When #jayz is in town this is what happen #jrgong #jamaica

#jayz and #vanessabling in #kingston

More pics of #hov and #jrgong in #jamrock

Jamaican legends Damian "Jr. Gong" Marley and Junior Reid joined Jay Z on set in Kingston on Friday. He was reportedly in the Caribbean to record footage for an upcoming visual; as well as to spend time recording with Jr. Gong and Sister Nancy at Tuff Gong Studios, which occurred shortly after his arrival on Thursday. #jayz @realjuniorreid @damianjrgongmarley #kingston via @aintnojigga