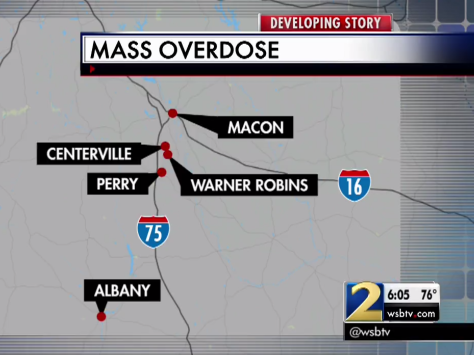 Macon, GA – A mass wave of overdoses has engulfed the central Georgia area, leaving at least four people dead and dozens of others hospitalized in various conditions.

Investigators are saying the victims assumed they were taking the reigning Hip Hop drug, the painkiller known as Percocet, but instead, wound up taking a lethal synthetic fake yellow pill.

“It’s being sold on the street as Percocet, however, when it’s taken, the patients are experiencing significant and severely decreased levels of consciousness, and respiratory failure,” Dr. Chris Hendry, the Chief Medical Officer for Navicent Health, told local Georgia press outlets. “There’s the potential that there’s been four deaths associated with this opioid overdose.”

According to 11Alive, overdoses have been reported in Georgia counties, Centerville, Perry, Macon, and Warner Robins, but investigators feel the counterfeit meds may be sold in other parts of the state as well.

Two of the deceased have been identified as Gregory Mitchell, 52, of Macon and Amirrah Gillens, 36. Both autopsies are scheduled for Wednesday (June 7). As of press time, doctors are still awaiting the toxicology reports for the other two casualties to determine the exact cause of death.

Although the contents of the pill are unknown, Dr. Hendry believes that it consists of powerful opioids that yield an unsurprising result given their potency.

According to the US Centers for Disease Control and Prevention, the state of Georgia reported around 1,300 overdose deaths in 2015 and throughout the current, an opioid epidemic known as “grey death” has been gripping the South. Even more popular is the rise of the street copy of fentanyl, the same drug Prince accidentally overdosed on last year.

Sheriff David Davis of Bibb County admitted his department had no suspects at the time of the press conference but assured the public they were following leads.