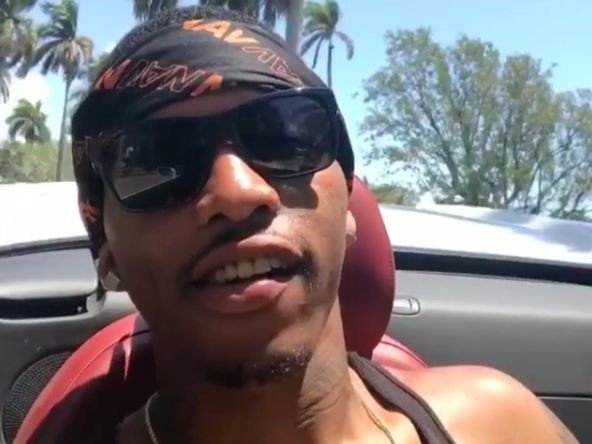 Waterloo, IA – After the news broke that 600Breezy had been arrested in Waterloo, Iowa for a probation violation and would possibly serve 10 years, the Chi-Town rapper in question quickly took to social media to assure fans he’d serve nothing close to a decade. While details surrounding the arrest are still fairly scarce, Breezy shed some light on the situation in a statement given to Chicago-based music blog Fake Shore Drive and again shouts out Drake.

“I did receive 10 year prison sentence (soft), from my probation being revoked because the state requested it and the judge agreed based on me smoking weed while on 5 year probation case dating back to 2012 in  Waterloo Iowa / Blackhawk County,” he wrote. “my current efforts are to stay positive & prepare to assist my team in a early release. This was my fault, I apologize for the  disrespect the system felt, but I did not harm anyone or catch any new cases. All my fees are paid & I just wanted to be release to travel the world and move my kids out of Chicago.  FOREVER Grateful for my Team, My Tt. ,Rita Lee, Ghazi. & My Big Bro Drake.”

In an Instagram video posted on Tuesday (June 6), he stressed the importance of staying positive and sounded confident his “summer vacation” wouldn’t last long.

“Stay positive, man,” he said. “The system is designed for all of us to fail … I’ll be back on the streets soon.”

(The original version of this article was published June 5 and can be found below.)

A Waterloo, Iowa court appearance for Chicago rapper 600Breezy took a wrong turn when the artist was reportedly sentenced to 10 years in prison.

Details of the arrest were shared in a now-deleted upload to 600Breezy’s Instagram profile, which stated the rapper, who had three months left on probation, was taken into custody because he apparently smoked marijuana and was “black while on probation.”

“Six-O-Breezo was taken into custody for probation violation,” read the screen capture of the Instagram post, which was obtained by Kollege Kidd. “We will keep his fans updated. It was very extreme but his team will be working to get him back to his kids & right back to work. Please understand it was over smoking Gods gift & being black while on probation.”

Breezy’s mother, Renita King, also confirmed reports that her son was given 10 years in prison.

Considering 600Breezy appeared on Drake’s More Life playlist, it looks like the Canadian powerhouse has pledged his support for the currently incarcerated rapper.

A text message conversation between Drizzy and an unidentified person in Breezy’s camp clearly displays Drake’s team’s willingness to do “everything we can” to help 600Breezy in his current predicament.

Despite his 10-year prison sentence, he’ll likely be out in less than a year, according to another Instagram post on his 600Breezy account. In audio from a phone call, which was also shared on Instagram, Breezy offered clarification and gave a shout out to Drake.

“They played me, man. But they can’t [hold] me forever,” 600Breezy said on the call. “I don’t got no 10 years, man. I’m looking at a year or less…I’m not fucking with nobody. I’m not rocking with nobody. A lot of these nigga don’t fuck with me … I know who I got in my corner. Shout out to my big brother, Drake.”

#600breezy locked up and his team says he will be back before a year. He was arrested for violating his probation

600Breezy’s probation stems from his 2012 arrest for crack cocaine possession.