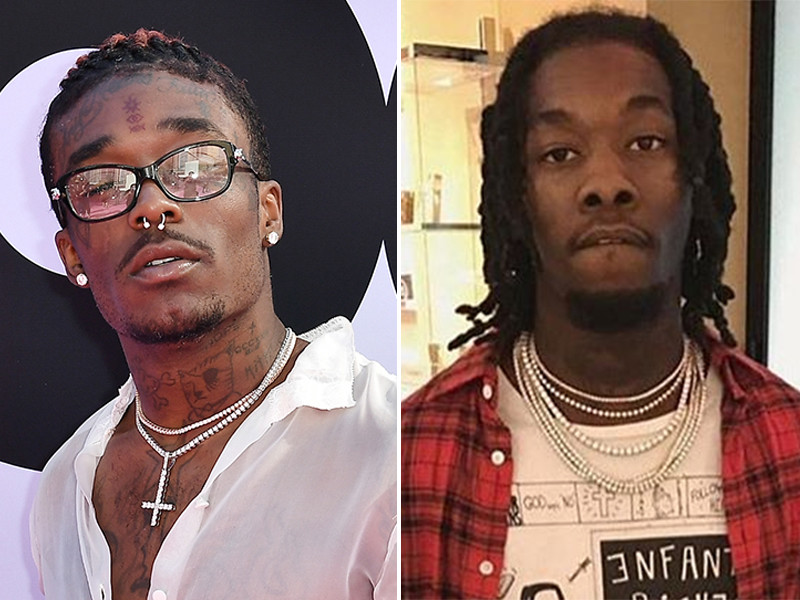 XXXTENTACION, Lil Uzi Vert & SahBabii Go In On Offset Over His Upside Down Cross Comments

The beef continued on Tuesday night (May 23) when XXXTENTACION  jumped into the ring for the unfolding drama between Migos rapper Offset, SahBabii, and Lil Uzi Vert. Singling out Offset — and noting that the other Migos members are better rappers than him — he claimed the ATL rapper is always “on somebody’s dick.” He also picked on the rapper’s age, claiming he’s “35 and still trying to ride that wave.” Of course, this fanned the flames that had been burning for months.

The cause of all the recent commotion? Upside down crosses. Earlier this week, Offset said — via video — that rappers need to cool it with the seemingly anti-Christian trend. “Stop that shit boy, you look lame,” he said. “All that worship the devil shit. Get with God, man.”

Chicago rapper SahBabii, who has been enjoying life a lot more since his breakout hit “Pull Up Wit Ah Stick,” took offense to the comments. He posted on his Instagram, “You Talm Boud My Cross Gon Stay Upside Down Y’all N***s Donate $1,000 to Washington But Will Throw $10,000 in a Club I Will Beat Yo Ass.” He followed that up with a more general statement: “Fuck Migos.”

Offset responded with a more threatening tone via video, prompting an additional response from SahBabii, calling him a bevy of things, including and “industry pigtail wearing bitch.”

Uzi, who rocked an upside cross to Drake’s big night at the Billboard Awards last Sunday (May 21), reacted with a video claiming he’s “cool as a clam in the sea.” He appeared to be taking the high road, even in another video where he drew upside down crosses on the screen, while smiling and showing off his chain.

Offset appeared as a featured artist on Uzi’s The Perfect Luv Tape on the song “Of Course We Ghetto” alongside Playboi Carti, and contributed an infamous verse to Migos’ #1 hit “Bad and Boujee,” so keeping it light is probably good business.

Not surprisingly, it escalated quickly. Ironically, Migos had made similar claims of Drake “biting” in the past. The particular issue was ongoing and hadn’t seen much traction since early April.

For what it’s worth, XXX’s rant did explain the trend has nothing to do with religion at all and really shouldn’t even be this big of an issue. He ended with “I ain’t neva had my chain snatched,” a final Snap captioned with “TRU FACTSSSS!”

SahBabii also explained his use of the seemingly Satanic iconography in a post reshared by Kollege Kidd.

Offset has yet to respond to XXX’s Snapchat barrage, but it’s likely he will because that’s how rap beef goes.