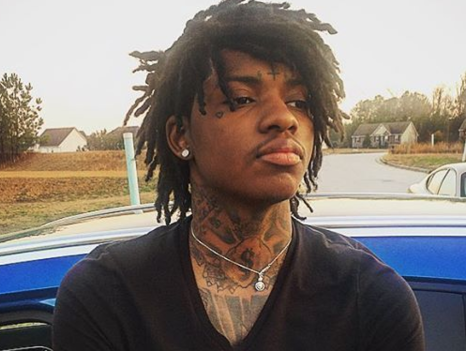 From Drake To Young Thug, SahBabii Has The Ultimate Rags To Riches Story

Los Angeles, CA – As we’ve discovered doing #DXLive every Thursday 3pm-6pm (#freeplug) there are thousands of aspiring artists out there with the talent to go bar-for-bar with any of today’s top money earning MCs. But like we always say, it’s more than that. Strong hooks, catchy melodies and an ability to appeal to a broad audience.

After years of making a living the way the streets taught him to and suffering through depression while trying to make a dent in Atlanta’s flourishing music scene, SahBabii went from feeling at an all-time low to seeing his song “Pull Up Wit Ah Stick” hit an all-time high through the power of Instagram. Now, a few months later labels are courting him like he was an NBA All-Star that just hit free agency. As the machine gets ready to grab hold of the rising star rhymer, we wanted to get to know the young man behind the song that went from a throwaway to garnering the attention of Drake who vowed to put a verse on the remix of it.

In an exclusive conversation with HipHopDX, SahBabii opened up about his depression, the Instagram post that would change his life and the sudden shift from not leaving his block to flying all over the country and even to Europe to rub shoulders with some of rap’s biggest names.

HipHopDX: What were you doing this time a year ago?

SahBabii: I was broke you feel me? I was still in the streets doin’ what I was doin’ to get a little come up, a little money. So it was boring. I was kinda depressed cause I ain’t have no money, so I was engaging in all types of stupid stuff to try to get some money, but I was depressed. I wanted my music to jump off but I was in the streets really though.

DX: During that time how bad did your depression get?

SahBabii: I got so depressed that I had a bald spot in my head and they told me it was because of stress. I had a couple of suicidal thoughts.

DX: What helped you overcome that?

Now Lately Niggas Hatin But I Don't Give No Fuck, I'm On Da Block Wit Da Guys And We Wild Af ?????-JoJo

DX: What was that first moment when you realized that “Pull Up Wit Ah Stick” was becoming a hit?

DX: You recently flew to London to meet Drake. How did that conversation go?

SahBabii: Me and Drake didn’t really have no dialogue. We shook hands. He said “What’s up” I said “What’s up” He [said that he] was just putting the verse on “Pull Up Wit Ah Stick.” He was just about to perform so we didn’t get to talk too much. Drake is a real good person.Young Thug and his team flew me out there.

DX: Did you already have a relationship with Thugger at that point?

DX: How did Thug first get ahold of your when the song took off?

SahBabii: First Thug’s A&R hit me up and said Thug wanted to FaceTime but the connection was messed up at the time so we ain’t get to FaceTime. A couple of days later we got on FaceTime and his A&R was saying how they were gonna fly me out to London. London was great. Me and Thug, we did a couple songs.

DX: You also got a nice shout out from Metro Boomin.

SahBabii: Metro Boomin showed love. He just uploaded a photo quoting one of my songs. Metro Boomin, he showed a lotta love. He brought me out to perform at Center Stage.

DX: Did you guys talk about possibly working together?

SahBabii: No we ain’t spoke on [working together] he just been showin’ love though. I respect that more than him just trying to come at me with a project. I respect that he really messes with my music.

DX: The past few weeks you’ve been on the road and getting courted by labels so much it seems like an extreme opposite of your life before this. Has it been overwhelming?

DX: Now, wherever you do wind up the pressure is gonna be on to put out a strong debut you know that right?

SahBabii: I got real good music, both that I dropped with SANDAS and [what I got] saved up in the catalog. I’m coming harder and harder. I’m competing with myself so I look forward to the challenge.

DX: On the topic of the labels, how has the process been going?

SahBabii: It’s a lotta labels interested. I’ve been meeting with them back and forth but we still in negotiations with the labels trying to figure out who we’re gonna pick.

DX: If you could pick one product that you use in your everyday life to endorse and get free for life what would it be?

SahBabii: I ain’t gonna lie, I drink a lotta Sprite. Sprite with no ice.

DX: Speaking of Sprite, in Atlanta lean is a big part of the culture. Is that a part of your life?

SahBabii: No, I don’t do lean. I think most of the people drink lean cause they’re followers, so I don’t drink lean. I stay clean. I don’t smoke no more. I used to be a pretty heavy smoker but I think they’re putting stuff in the weed now so I don’t mess with weed too much anymore.

DX: We talked about a year ago, now tell me what is your goal for a year from now?

SahBabii: I want all my songs to be on the Billboard [charts] I want everybody listening to all my songs and I want them to know all the words, so I want to really drop a classic!