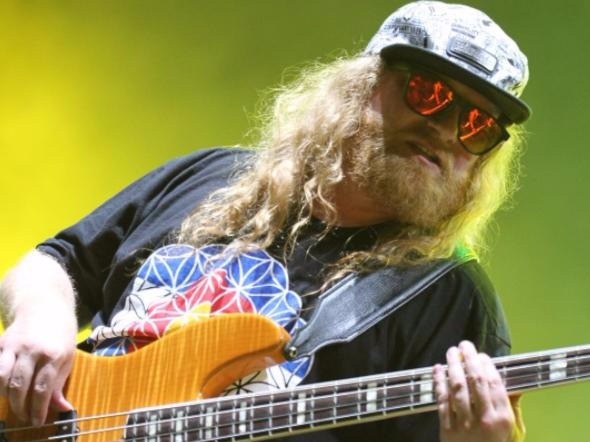 Morrison, CO – Sitting backstage at the picturesque Red Rocks Amphitheater in Morrison, Colorado, an unassuming musical force of nature — bassist Erick “Jesus” Coomes of the Boston funk band Lettuce — is dressed down in blue jeans, a tie dye t-shirt and a baseball hat that simply reads “Jesus,” allowing his wild mane of curly blonde hair to flow freely. No one would guess how deeply-rooted in Hip Hop the Grateful Dead-loving musician actually is.

From working on Kanye West’s “All Falls Down” and Eminem’s “Crack A Bottle” with Dr. Dre and 50 Cent, the Berklee School of Music graduate has his fingerprint on a litany of some of the culture’s most impactful songs. Consequently, he’s cultivated relationships with several iconic Hip Hop figures. In fact, DJ Quik coined his nickname in front of an audience.

“When I first got out of Berklee, I would work with Quik all the time,” Coomes tells HipHopDX. “There were just years and years of lots of different things happening in the studio where I was pretty much focused on music. I was not participating in any of the studio debauchery. He’s like, ‘Dude you’re like Jesus.’

“Then we were at a sold-out House of Blues show and he coined it on stage,” he adds. “He asked the audience, ‘Who does he look like?’ And everyone yelled ‘Jesus!’ That just kind of stuck.”

Out of all his various adventures, spending his birthday performing alongside Ghostface Killah and Solange as they sang “Cherchez La Ghost” during a 2013 Bonnaroo Superjam in Tennessee is a memorable highlight. That night, as he watched Method Man command the stage, he was blown away by the Wu-Tang Clan vet’s charisma.

“Having them sing that on my birthday was incredible,” he says. “And you know, Redman and Method Man, I’ve never seen anyone entertain an audience the way they do. I’ve seen people crowd surf, but I’m pretty sure Meth just crowd walked. He just stood up and it was like he was walking on water.”

The Jesus-like stunt brought up the “Jesus Walks” MC, Kanye West. Coomes was noticeably thrilled when the topic of Kanye was brought up and instantly debunked the preconceived notion he’s a crazy egomaniac.

“In regular party situations, I will totally back up Kanye and say I’ve met this man,” he says. “He’s a cool dude. My first word to describe him would be humble. He’s a humble person that just gets really excited. We get excited about music, you know? He might happen to make a really awesome beat. Just like you or I would hear his beat and say, ‘Wow that’s incredible.’ He does the same thing.

“He’s a fan just like we are,” he continues. “He hears the beat that he’s just made and we don’t know where it comes from — outer space, god or the universe or whatever you want to call it — but it’s coming through us. Right after it comes through, we freak out and go, ‘Whoa what was that?’ So you might see Kanye go, ‘Oh my god I made the greatest beat of all time’ or ‘I’m the greatest,’ but he’s just really excited about what music is doing. If you’re in a room with him, he’s very nice.”

While he admits collaborating with some of his heroes was a little “intimidating,” he’s appreciative of artists like Dr. Dre who make him feel at ease.

“It’s sort of like being in the room with your favorite superheroes from the silver screen,” he says. “The thing about Dre is he’s just so nice. And Dre is really conscious of that energy, so he will break that ice immediately and make sure everyone is comfortable.”

Around 2009, Dre flew Coomes from the Hollywood Burbank Airport in his private jet to work with Slim Shady on the Relapse album. He was disappointed in himself for falling asleep during the flight, but describes the experience like “being in a Ferrari that takes off flying.” Once in the studio, it was all business.

“I played a little guitar on that song ‘My Mom,'” he recalls. “At that moment, Em was in the room. As I was recording my part, he just goes, ‘That’s dope.’ I didn’t say anything and kept playing. But I thought about it recently and realized that was one of the coolest things that’s ever happened to me.”