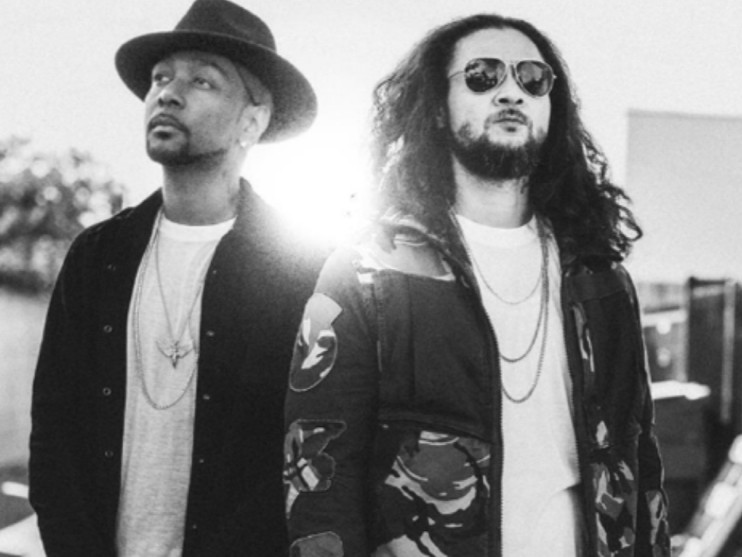 After unveiling their new moniker— Bone Thugs — and lead single “Coming Home” featuring Stephen Marley, Bizzy Bone and Krayzie Bone of the legendary Bone Thugs-n-Harmony crew are in heavy work mode, currently crafting their upcoming video, “Fantasy,” at a random roller skating rink somewhere in Los Angeles. While many Bone Thugs-n-Harmony fans are thrilled to finally see a Bizzy and Krayzie duo come to fruition, there are some saying it’s simply because the rest of the members “fell off,” something both Krayzie and Bizzy dismissed in a recent interview with HipHopDX.

“I haven’t heard it I guess,” Bizzy says. “There was a time when I was doing the Strength and Loyalty record that it was shit on Bizzy time. ‘Hey he’s drinking, he’s a drug addict, he’s doing this and doing that,’ and so on and so forth. I don’t take that shit personally. I just let them see what I’m doing and where I’m at with it, and that’s the same with the band. Layzie has a record out called Perfect Timing currently and the rest of us, we’re a traveling band. This is what we do. We get on the road, we work, stay relevant, and we stay out there.”

“I will tell you they wrong,” Krayzie adds. “They got it twisted for real.”

Bone Thugs-n-Harmony has always been like family (in fact, some of them are actually blood-related). Bizzy, Krayzie, Layzie, Wish Bone, and Flesh-n-Bone could not have established the legacy they have without all of the pieces to the puzzle. After all, the “Harmony” part of the name comes from five voices meshing together to create the group’s unique (and undeniably dope) sound. As far as certain members “falling off,” Bizzy assures people they’re still thriving, but also has a message for any haters out there.

“They eatin’, they got some money, they rent paid, and they doing good,” Bizzy says. “After you’ve been in the business for 20 years, sometimes certain artists fall off and can’t feed themselves.

Like most families would, the rest of the members supported the idea of Bone Thugs. The duo’s forthcoming album, New Waves, features contributions from the other three as well.

“This was something that was long overdue, so we decided to go about it in this way,” Bizzy explains. “With the support of all of the fellas, we were able to put it together. They gave us enough time to get in the studio to record it and stuff, and we were able to do what we needed to do. We also got some good stuff with the rest of the fellas on there. We’re a family and that’s just what we do.”

“The other members are just as active as we are,” Krayzie adds. “We’re doing our thing all the time. It don’t stop.”

Bone Thugs-n-Harmony is gearing up to the hit road once again on a massive North American tour. Check out tour dates here and watch for New Wave to arrive sometime in June.