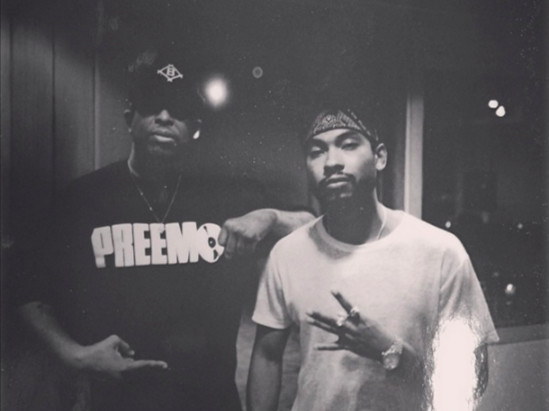 New York, NY – Legendary Hip Hop producer and turntablist DJ Premier has launched another imprint, TTT (To The Top), a wisely calculated next step in his impressive 30-year career. Although he established Year Round Records in 2003, he wanted to have another way to release music that was outside of his wheelhouse. Consequently, TTT (To The Top) was born.

“I wanted to have a label that would keep the street, gutter stuff in its own lane, one where I could release anything I wanted, how I wanted and where I wanted,” Preemo tells HipHopDX. “I had previous artists like the NYGz, part of Gang Starr Foundation family, Black Poets — stuff like that. I wanted to keep that as is. Every time my manager Ian and I handle business, he’s always like, ‘To the top, buddy. To the top.’ He said it so much, even though it got annoying.

“He suggested an alternative label that would keep Year Round going, but we’d have a division where we put out stuff that’s more alternative, a little left field, R&B stuff — whatever,” he continues. “Almost like Motown. We had to figure out a name. He’s great manager, but not the best at names [laughs]. He kept throwing names out and I didn’t like any of them. He finally said, ‘How about To The Top?’ and I was like, ‘Eh, I don’t know about that either. It doesn’t really catch.’ For some reason, it happened to click.”

He was also able to confirm singer Torii Wolf as the first official TTT artist. The two released their first collaborative single “1st” in May 2016.

To mark the inception of TTT, the Gang Starr pioneer has shared an alternate version of Miguel’s “Damned,” which originally comes from the singer’s 2016 effort, Wildheart. Titled “2 Lovin U,” this incarnation is met with Preemo’s precise scratches and the updated title. He was surprised Miguel’s label, RCA, was open to the idea.

“I asked if he was cool if we put it out,” he explains. “He’s signed with RCA, so I had to get management and the label to say yes. Usually, they say no to an indie, but they were totally cool with it. Instead of it being Miguel featuring DJ Premier, we flipped it and said DJ Premier featuring Miguel. When it finally came to seeing the light of day, I told him he’s saying, ‘You’re damned to loving you,’ so why don’t we use ‘2 Lovin U?’ That way, it kind of makes it new.”

The collaboration started with a glass of whiskey. While at SXSW in Austin, Texas several years ago, Preemo was posted up at a bar. “I hear a voice like, ‘Yo what are you drinking?’ and I turned around it was Miguel,” he recalls. “He bought my whiskey and the next thing you know, here we are.”

For now, TTT will release a string of singles, including a new one from Torii Wolf, “Big Big Trouble,” and one from a group called Cherub from Tennessee. However, the focus is on Miguel at the moment.

On the Year End side, he’s putting the finishing touches on his collaborative album with West Coast gangster rap vet MC Eiht.

“I’m actually driving right now to shoot my scratch scene for one of the MC Eiht videos,” he says. “I found my old Compton shirt and I’m driving to a parking lot because the director said he needs to shoot me with the sky in the background. I did all of the scratches on his album and we are about to do launch ‘GEAH’ campaign. You’ll see a new Eiht video in next two weeks for sure.”