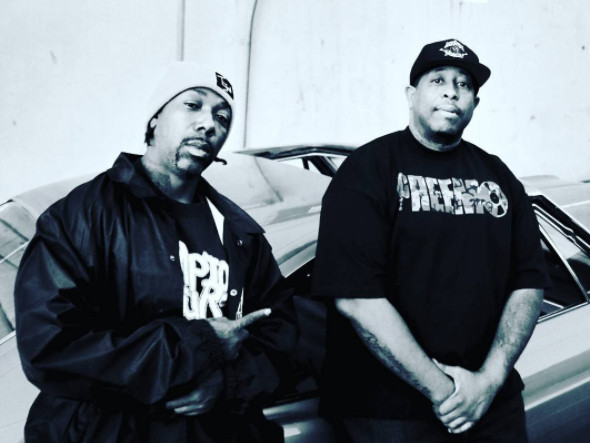 Since taking the gangster rap world by storm with his 1993 breakout hit, “Streiht Up Menace,” which was featured in the cult classic film, Menace II Society, MC Eiht has continued holding down his spot among the Hip Hop elite. Beginning with 1994’s We Come Strapped, his solo output has also been fairly consistent, culminating with his twelfth offering, Compton’s O.G., in 2006. The 44-year-old vet and founding member of Compton’s Most Wanted is now gearing up to release lucky number thirteen, a collaborative project with DJ Premier titled Which Way Iz West, which he says is “not for the Freshman of 2017.”

A-Wax: Eiht is famously known for not only appearing in Menace II Society but having the most recognizable song from its soundtrack.

“It’s not for the new class,” Eiht tells HipHopDX. “It’s not for them. My music is for people who love Ice Cube and for people who love Dr. Dre’s first record. My music is for people who liked Nas’ first record—that type of era of music. Not to say that I’ve switched up to this righteous intellect. I’m still MC Eiht on that Compton’s Most Wanted shit, but the music or verses don’t reflect the bullshit of today. When you pop in Which Way Iz West when it come out, you gonna go, ‘Oh this is some of that 1990s shit.’ That’s what it is. We trying to give you that feel. That’s all.”

Preemo and Eiht have already shot two videos for the project, and the album is completely mixed and mastered. It’s being released as a joint venture between Premier’s label, Year Round Records, and Eiht’s imprint, Blue Stamp Music.

“Right now, we are finishing the cover art and setting the official release date,” he says. “I’m lookin’ forward to bringing back some quality in West Coast music and in general.”

When Eiht began making music, he never imagined he’d be going on nationwide tours, selling countless albums or working with some of Hip Hop’s most coveted artists. In East Compton, where he spent his childhood, his only goal was to gain the respect of the homies on the block. Now, however, his name is often mentioned in the same breath as Eazy-E, N.W.A and Ice Cube. DJ Premier and Eiht are aiming to drop the new album mid-February with a goal of continuing the West Coast legacy of innovative, unforgettable music.

If Pirus & Crips All Got Along: Eiht got put on the new generation’s radar back in 2012 thanks to his appearance on Kendrick Lamar’s landmark debut, good kid, m.A.A.d. city.

“It’s been a long time since we first started with our type of music as far as the West Coast is concerned, but I feel it’s been pretty significant over the years,” he says. “If you look down the line, we’ve produced or put out some of the most prolific rappers— from myself and Eazy-E to Dre and Snoop. The list goes on with The Game, Kendrick, and whoever else, too. As far as representing the West Coast or Compton, our music has come a long way— from when we first started with Ice T’s ‘Six ‘N The Mornin’ to Kendrick Lamar winning Grammys and whatever, so West Coast and Compton music is significant as far as Hip Hop as a whole is concerned. You have to put us right there with the pioneers like Kool Herc and Grandmaster Flash. No doubt.”