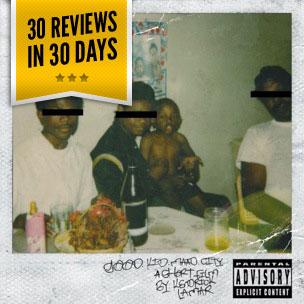 Of all the likely First World pressures that have inevitably crept into the life of Kendrick Lamar over the past year and change –  since he and his Top Dawg Entertainment cohorts unleashed their brand of genre pushing Hip Hop on the world – only one truly matters: Releasing a successful debut album. Following 2011’s tour de force Section.80, a slew of shine-snatching featured lyrical clinics, and a downpour of cosigns ranging from Brother Ali to Lady Gaga – K-Dot’s in a position few in Rap history not named “Nas,” “Canibus,” or “50 Cent” have ever occupied. Only two of those sport initial releases that validated the hype machine; only one of those commercially. The same one that Kendrick’s current Aftermath label-head, Dr. Dre, launched into ubiquity back in 2003. Add that backdrop to the critical acclaim of fellow TDEers Ab-Soul and ScHoolboy Q this year (with #controlsystem and Habits & Contradictions, respectively), and Compton’s kid is swimming in a mote of expectation. Fortunately, at least creatively speaking, Kendrick delivers with ease. From mic to plug, Good Kid, m.A.A.d. City is stellar.

GKMC lives in its narratives. There’s the one where Kendrick’s driving his mom’s van while his girl is texting him titty shots. (“Sharene a.k.a Master Splinter’s Daughter”). There’s the one with MC Eiht where K-Dot talks about staging a robbery while working as a security guard and smoking cocaine laced marijuana (“m.A.A.d. city”). “And they wonder why I rarely smoke now / Imagine if your first blunt had you foaming at the mouth,” he raps over the Sounwave and Terrence Martin-produced ratchedy madness. There’s “Sing About Me, I’m Dying’s” awesome perspective flip where he spits as a gang banger, then Keisha’s sister (from Section.80) in consecutive verses and both literally speak their demise into existence. The Just Blaze produced “Compton” (featuring Dr. Dre) and the gloriously ignant “Backseat Freestyle” are the only true cypher cuts. No brain-twisting exploits like “Rigamortis” included this time around, for example. And that’s alright. Kendrick’s joy ride is as visceral as a John Singleton flick or something; equal parts Boyz In The Hood, Higher Learning, and Baby Boy, only the 2012 version told on wax. The interludes cinematically tie the good kid fighting his way through a mad city theme together and are conveniently included at the end the of songs instead of as separate tracks so they don’t clutter the listen when rocked on random. The production and engineering are absolutely impressive. Structurally and conceptually, as an album, GKMC is amazingly tight.

But what keeps this LP littered with replay value is Kendrick’s range as an emcee. Styles and cadences pivot on a dime, whether on or off beat. He’ll flip octaves like he’s harnessing first generation Dungeon Family members. Tracks like “Swimming Pools (Drank)” and the Drake-assisted, Janet Jackson-sampled “Poetic Justice” are the type of songs that should be on radio more often: Genuinely imaginative in approach. Lines like “I can feel your energy from two planets away / I got my drink / I got music / I would share it but today I’m yelling ‘Bitch, don’t kill my vibe!'” (“Bitch, Don’t Kill My Vibe”) are not only supremely relatable under any tax bracket, but quotable enough to reach bootleg T-shirt status. He never takes a verse off, never forgets the importance of connecting as a person.

With Good Kid, m.A.A.d. City, Compton’s flag bearer unveils a group of songs equally potent individually and collectively, meeting the mainstream and rabid fans in the middle, improbably touching that thinnest slice between mass appeal and mass respect. “I’m tryna keep it alive and not compromise the feeling we love,” K-Dot kicks on that previously mentioned track-to-be Tee. “You’re tryna keep it deprived and only cosign what radio does…” This isn’t just a debut album. This is a shot at history.