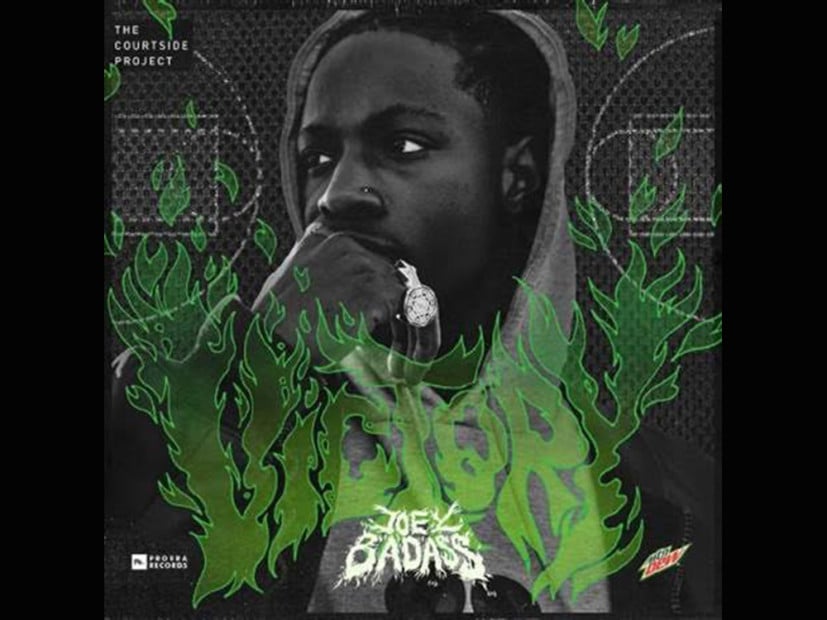 New York, NY – Joey Bada$$ celebrates his personal accomplishments, as well as those of the NBA, in his new song “Victory,” made in partnership with Mountain Dew.

“Me and Mountain Dew, we’ve been doing deals over the years,” Bada$$ told DX over the phone. “We’ve been building up our chemistry and a solid rapport over the last couple years, so immediately when the All-Star Weekend conversation was brought up, they go to me right away and they decided to get me involved. That’s where I came in. I stepped in, I was challenged to make a song for basketball tied in with All-Star Weekend, tied in with a few NBA players such as Russell Westbrook and Kyrie Irving, but me as a solidified Hip Hop artist, it was a challenge for me to merge both worlds.”

He seems to have risen to the task. His lines about the two All-Stars are fire.

For Russell Westbrook: “A kid from West Brooklyn, came with the Thunder, every day had the triple double entendre.”

For Kyrie Irving: “At times I sit and wonder how we keep from going under, but I always beat the cut like Kyrie Irving at the buzzer.”

The Kirk Knight and Adam Pallin-produced song is part of The Courtside Project, a collaboration between Mountain Dew and leading trendsetters in art, fashion and music. The beverage company replaced Sprite last year as the league made PepsiCo its official food and beverage sponsor after 28 years with Coca-Cola. Mountain Dew was seeking fun ways to activate its sponsorship when they reached out to the New York rapper for a new project for All-Star Weekend, which starts Friday (February 17).

Joey will be on-site at the All-Star Game in New Orleans to help promote The Courtside Project and filming a music video. It’s his first time attending All-Star Weekend.

“I’ve never been to the All-Star Game, so that alone is amazing,” he says. “I’m most excited for the Dunk Contest and Three-Point shootout. I’ve always wanted to see those events in particular.”

Bada$$ shouts out Thompson’s Golden State Warriors on the song when he raps “Got a team of Warriors, nobody ranked above us.”

“I’m definitely a fan,” he says of the 2015 Champions. “They doing their thing. They’re killing it. They’re one of the best teams in the NBA.”

But Irving and the Cleveland Cavaliers, who beat Golden State in a rematch of the Finals last year, are more who Bada$$ roots for, especially with his beloved New York Knicks struggling lately.

“I’m more Cavs than I am Warriors for sure,” he says. “I’m more of a fan of the Cavs, East Coast pride, East Coast love. Of course, LeBron James is the best player in the world.”

And Bada$$ pays homage to King James in “Victory” when he raps “I’m in a league of my own, 2-3 when I get in my zone.” Of course, 23, is often a reference to Michael Jordan and Bada$$ says his line is meant to equally pay tribute to both legends. The 22-year-old respects MJ for all he did on the court and yes, he says Space Jam is one of his favorite movies.

“The new generation, they do know Michael Jordan,” he says. “… Even though he was the old generation, everyone knows Michael Jordan. Everyone knows he was one of the greatest, THE greatest player to ever play the sport and now present day, LeBron James is right there. In my opinion, Steph Curry is going up the ranks fast, but he’s still not on LeBron James’ level just as far as accolades, stats, repertoire.”

Bada$$ grew up playing basketball and was familiar enough with the sport to do the track, but it was important for him to make the song about something more universal than the hardwood.

“I wanted to talk about basketball, but I also wanted to merge real life aspects into that,” he says. “So that was the real challenge for me and I thought that there was no better way to do that than insinuating and talking about victory because that’s something that we all strive for whether on the court or off the court.”

In regards to his personal victories, the independent rapper has a lot to celebrate as the fruits of his labor from his debut album B4 Da $$ and other music is starting to pour in.

“Just scored my first gold record with my song ‘Devastated’ so that was a big victory for me,” he explains. “I’m about to score another gold record on my first album and I’m about to put out my new album, so yeah, it’s gonna be a lot of victories coming up and in 2017 in general so I’m super excited for that.”