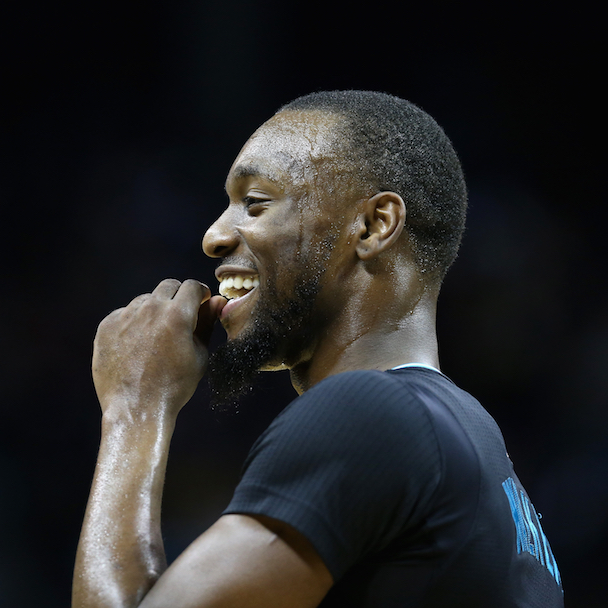 Rap music and basketball have parallel cultures that have been noted at least since Kurtis Blow’s 1984 song, “Basketball.” Throughout history, rappers and basketball players have shown mutual admiration for each other, whether it’s Jay Z’s stint as part-owner of the Brooklyn Nets, J. Cole having basketball-inspired cover art, or, perhaps the most common salute to the hardwood, name drops. Michael Jordan, LeBron James and most recently, Stephen Curry have all crossed over into Hip Hop culture due to significant mentions in rap lyrics.

One player who deserves to be noticed by the rap game’s elite is the Charlotte Hornets’ Kemba Walker. The 6-foot 1-inch point guard has flown under the radar since being drafted in the first round in 2011. The Hornets aren’t exactly in a huge media market and their winning percentage hasn’t boosted them to the top of the rankings. They did make the playoffs in 2014. Yes, they were swept by the Miami Heat, but Walker averaged 19 points per game in the series.

This season, he is averaging nearly 20 points and as fellow UCONN Huskie Caron Butler pointed out, is worthy of being an NBA All-Star. The roster for the 2016 team was announced Thursday (January 21), and Walker’s name was not on the list of starters. The reserves are announced next week, but whatever the outcome, don’t expect Walker to let it affect his hunger for greatness.

Here are seven reasons Kemba Walker should be rap’s next big name drop:

Kemba Walker scored a career and franchise-high 52 points in a double overtime win over the Utah Jazz Monday (January 18). The 25-year-old joined the elite ranks of Kobe Bryant, Michael Jordan, and LeBron James as the seventh person since the 1985-1986 season to have 50 points, nine rebounds and eight assists in a game. Rappers will have an easy enough time rhyming with “Jazz” and, if they want to get intricate, can weave in the name of Walker’s protege while at UCONN, Shabazz Napier. Walker is averaging 19.9 points this season, which ranks 21st in the league. He has grown in his leadership as head coach Steve Clifford has tried to put together a consistent team. Walker not only has the stats, but also the passion and self-accountability of a true leader.

Michael Jordan is probably the most acknowledged basketball player by the rap world. Walker signed to Jordan Brand in October after a stint with Under Armour. But unlike other Jordan athletes including fellow point guards Chris Paul and Russell Westbrook, Walker has a relationship with the G.O.A.T. that goes beyond sneakers. Jordan owns the Hornets and has an active role on the team’s management. In an interview with GQ, Walker explained how Jordan has served as a mentor to him and that he always plays better after talking with the six-time NBA Champion.

Kemba Walker Is On The “Buzzin” Charlotte Hornets

Rappers like to be buzzing and that’s exactly what Hornets do. It doesn’t even have to be as obvious as Mann’s hit single “Buzzin.” The Game and YG joined Lyrica Anderson on her track with the same name. August Alsina said he’s “buzzin” on “Numb.” Chance the Rapper utilized the term in the controversial lyric on “Family” where he says “Tell him that he’s buzzing like a game of operation with Parkinsons.” Whether the rapper chooses to use the term to give himself props or to diss another, giving a shout-out to Kemba Walker, the face of the Charlotte Hornets’ franchise, would make for a strong bar.

Even though the Hornets aren’t exactly known for their winning ways, let’s not forget that Kemba Walker guided the UCONN Huskies to the NCAA National Championship in 2011, the school’s fourth crown. On the road to the title, Walker led the Huskies to five victories in five days as they won the Big East Championship as the #9 seed. Walker scored 130 points across the span of the tournament. In the Big Dance, UCONN came in as a #3 seed and beat Kentucky and Butler en route to the title. What rapper doesn’t want to associate himself with those heroics?

So Many Words Rhyme With Kemba Walker

What rhymes with “Kemba?” Maybe “rememba?” We don’t know. So the challenge is now up to the game’s top rappers. “Walker” could go with “stalker” or “gawker” or more simply “talker,” but we’re sure someone can be more creative.

Kemba Walker Is From The Bronx

Ah, the Bronx, commonly known as the birthplace of Hip Hop. KRS-One and Fat Joe call the New York borough home and so does Walker. Growing up in the Bronx gives Walker plenty reason for rappers to relate to him. As a child, the basketball player even performed at the Apollo Theater with his dance troupe. That’s probably where he gets his fancy footwork.

Kemba Walker should be an All-Star. The guy is having a tremendous season and if you need full analysis, visit At The Hive or read Caron Butler’s piece on the Player’s Tribune. Walker is the perfect underdog story, something that rappers thrive off of. Whether it’s Drake claiming he “Started From the Bottom” or The Game, with an assist from 50 Cent, claiming that “Hate it or love it, the underdog’s on top,” the rap game was founded on the idea of a suppressed group of people fighting for its own shot at the American Dream. The “buzzer” is counting down on the voting in 3..2..1.