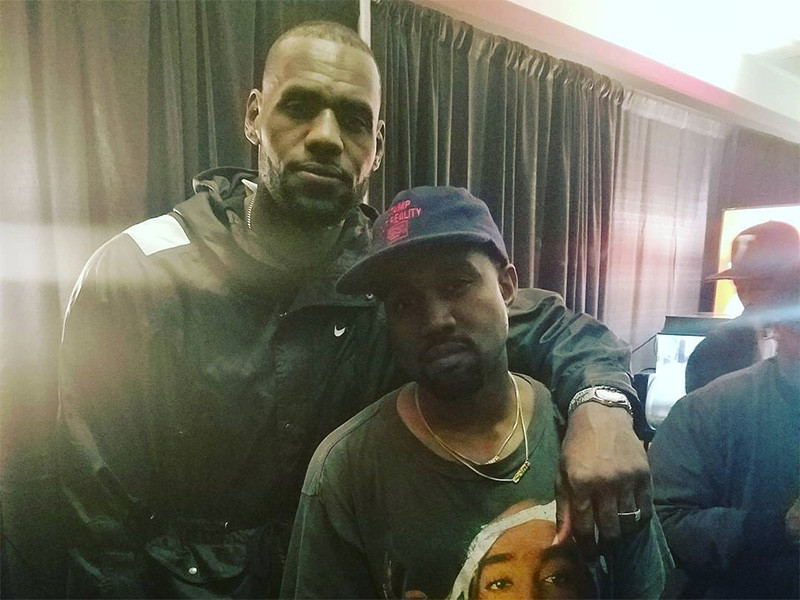 Cleveland, Ohio – LeBron has been busy enjoying himself in his downtime as the 2015-2016 NBA champion. About six weeks after dancing with Drake during a Summer Sixteen Tour stop, King James, along with his Cleveland Cavalier teammates J.R. Smith, Tristan Thompson, Kyrie Irving, Richard Jefferson and Dahntay Jones went to their home stadium in Cleveland, not as the main attraction, but as spectators for Kanye West’s Saint Pablo Tour.

Several of them made their way down to the crowd, dancing and singing along to “Can’t Tell Me Nothing.” (J.R. Smith singing “Wait till I get my money right” is particularly suitable since he’s in the middle of contract negotiations with the team.)

The Cavaliers made their way to the floor at Kanye's concert pic.twitter.com/ietVUK0Pwk

Just hanging out with some friends at the #saintpablotour @cavs @KingJames @TheRealJRSmith @RealTristan13 @kanyewest #cavs pic.twitter.com/ZW1OvY6hfN

The Cavs took this cute photo after Kanye's concert. pic.twitter.com/e9BqseEKHh

Khloe Kardashian also shared a clip of James toasting to Kanye’s success and his own, saying that he wanted to “continue to inspire each other.” In the caption of his own Instagram picture, he wrote, “Keep soaring to places untouched homie and let’s continue to inspire!”

Appreciate you coming and showing my city love last night and they defintely returned the favor!! Keep soaring to places untouched homie and let's continue to inspire! #King&Yeezus? #StriveForGreatness? #RWTW?