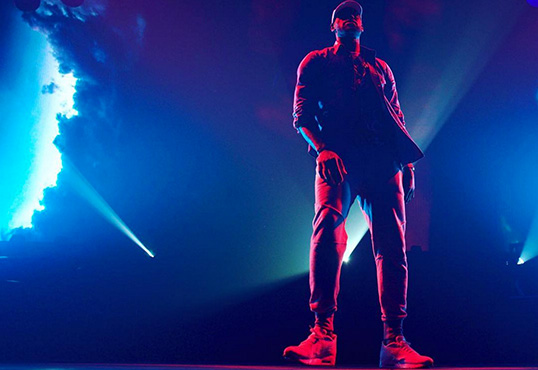 Columbus, Ohio – There are clearly no hard feelings between Toronto Raptors mega-fan Drake, and LeBron James, the man who helped knock out the Raptors from this year’s Eastern conference finals before going on to claim the NBA Championship with the Cleveland Cavaliers.

During the “Summer Sixteen” tour stop in Columbus, Ohio, on Saturday (August 13) the rapper brought out King James, a day after he’d signed a $100 million contract to stay playing for the Cavs for three more years.

LeBron appeared for Drake’s performance of the VIEWS cut “Pop Style,” with a line personalized for him: “Bronny, Bronny had to handle that one his way.”

He bounced across the stage and danced along as Drake performs the song.

Addressing the crowd afterward, James said, “Yo one time, for Columbus, Ohio, give it up for Drizzy motherfuckin’ Drake, and one more time for my brother Future who killed this shit tonight.”

“That’s what you call a hometown here, right here,” Drake said as the crowd began to cheer “M-V-P!” for the Cavs star.

James is only the latest in a series of big-name guests to hit the “Summer Sixteen” stage. So far, Kanye West, J. Cole, Cam’ron, Fat Joe, Remy Ma and others have appeared.