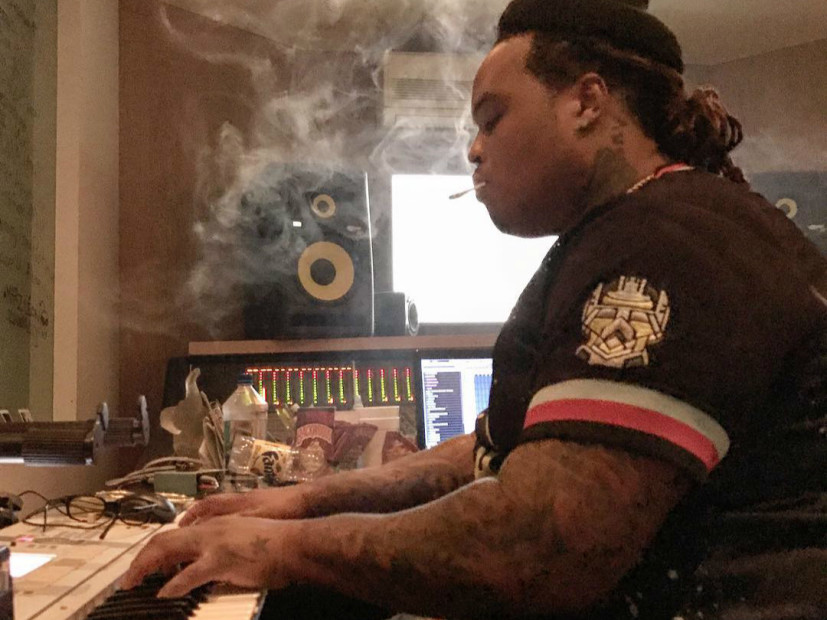 Los Angeles, CA – One of the key members of the Atlanta Hip Hop scene is Cassius Jay — and yes, his name is a spin on Muhammad Ali’s birth name, Cassius Clay. During a recent trip to Los Angeles, Cassius Jay, born Joshua Cross, stopped by HipHopDX for an interview and told us he knows he has big shoes to fill by taking his name from perhaps the greatest boxer of all time.

Cassius Jay is creating his own lane with what he’s calling “trap jazz.” He studied jazz in college and has woven piano and the whole genre into his sound. He even took on the persona Trap Sinatra and released a mixtape of the same name to help step out of the shadow of the godfather of it all.

“Zaytoven’s like a trap god, so I’m like a trap prince or whatever you wanna call it,” he explains. “So I was like let me just get my own identity. I didn’t want to be a trap god. I didn’t want to be labeled as that, so I was like let me become Trap Sinatra or something, just have my own swag, my own little lane. So that’s what made me come up with the whole Trap Jazz thing.”

He met Zaytoven in church around 2011. They exchanged phone numbers and kept in touch ever since. Cassius says that he’s learned his work ethic from Zaytoven.

“Keep grinding, don’t ever stop the hustle,” he says. “That man never stop, one hundred, he just go one hundred every day. It’s like ‘Cuz, you ain’t tired? You ain’t sleeping?’ I think that’s what I learned the consistency of it from Zaytoven. Just to keep going and don’t stop the grind.”

Zaytoven is known for being honest about his faith as he works with artists like Gucci Mane and Migos while playing piano in church. Cassius Jay says he takes an approach where he separates the two worlds.

But what he is combining is working, as the initial response to his trap jazz single “Boot Up” was positive.

“Everybody loved it,” Cassius Jay says. “It’s something fresh, it’s something new. And it’s like, it’s trap music with jazz music, so it’s just something refreshing.”

That’s apparently just the beginning, as Cassius will continue testing the waters with various singles leading up to a full album that has yet to be titled. He says the project will come out around summertime and will hopefully lead to even more trap jazz.

“I’m gonna think of something dope,” he says of a potential title for the album. “But right now we’re just trying to brand the trap jazz whole thing. So everything might just be called ‘trap jazz’ until people get familiar with it. Then we’ll come out with a name on the next album.”

When he’s not crafting his own music, Cassius Jay stays busy working with Young Thug, Jacquees, Dae Dae and many more, including Uno The Activist, who he says everyone should watch out for. He and Peewee Longway dropped Longway Sinatra in November. He also appeared on Future’s Dirty Sprite 2 and the Esco Terrestrial mixtape. He explains the process of trying to make it onto any of the Atlanta superstar’s projects, especially as Future’s own intense work ethic is no secret.

“I was just in the studio with him Friday, he did like 10 songs in one day,” Cassius says. “I was like, ‘Whoa. Ok, so I guess I gotta go make some more beats.’ Then it’s still a guessing game. You still guessing like, ‘Oh, I hope I make this album’ because he makes so much music, so you never know.”

One artist that he’s affirmed his legacy with is the late Bankroll Fresh. Cassius was a close friend of the rapper, who died nearly a year ago. He crafted “Hot Boy” and says that he’s agreed with Bankroll’s family to let that song carry the legacy even though they have much more in the vault.

“He was a good guy and stuff, so I don’t feel like I should in a way,” he says of releasing new music. “His family can do it, but I shouldn’t be releasing none of his music because they didn’t give me the consent to do it. I don’t even really try to bring it up to ‘em because you know how the industry is right now, so I just was like whatever it was we did, we’re just gonna leave it at that and that was ‘Hot Boy’ and that was his biggest song, so I just wanted to leave it at that ‘cause we was real close.”

As he continues in his musical journey, Cassius says he’d love to work with Chance The Rapper, BJ the Chicago Kid, Jay Z, Kanye West, Beyoncé and Rihanna. He got a taste of what he thinks could be a monster collaboration when Master P jumped on one of his beats recently. What started as an Instagram clip of the No Limit boss rapping over Peewee Longway’s “Master Peewee” turned into a full-blown remix.

“Somehow he heard the song, he hit us up to send me the song without one of the verses on it, so we sent it to him, next thing you know, we see him jumping around, rapping on it,” he says. “… I was excited. I texted him I told him, ‘Let’s do a whole album.’ I want to do a whole album with Master P. I like Master P. I grew up on that stuff, so I was very excited about it.”

Only time will tell if a Cassius Jay/Master P album ever comes together, but in the meantime, the producer says his goal for 2017 is to have three #1 hits on Billboard’s Hot 100. With Migos’ “Bad and Boujee” (produced by G Koop and Metro Boomin) and Rae Sremmurd’s “Black Beatles” (produced by Mike WiLL Made-It) topping the chart, Cassius Jay’s chances are as good as ever.

“Three number one hits this year,” he says. “That’s my goal. I’m gonna do the DJ Khaled. I want three of ‘em. And I ain’t gonna stop ’til I get ‘em, no sleep or nothing.”