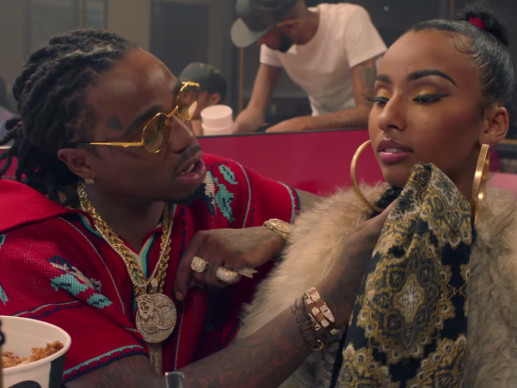 It’s not enough that Childish Gambino thanked Migos for “Bad and Boujee” as Donald Glover accepting his first Golden Globe for the FX series, Atlanta yesterday (January 8). Today, the ATL trio nabbed an achievement of their own with the same song, which features Lil Uzi Vert, landing at #1 on the Billboard Hot 100 chart. A first for all.

The song knocked down Rae Sremmurd and Gucci Mane’s viral single “Black Beatles” from the top spot, which also happened to be their first #1 Hot 100 hit after everybody and their mama got in on the #MannequinChallenge mania.

“Bad and Boujee” is the first single off Migos’ sophomore effort Culture and is produced by Metro Boomin and G. Koop. The song gained traction when a video made its rounds on the internet of the group performing it to a super, hyped up crowd in Lagos, Nigeria. Lots of “Rain drop, drop top” memes soon followed.

And yes, the Donald Glover shout-out at the Golden Globes ceremony was a definite highlight of the song’s momentum, where he also compared the group to the Beatles. A comparison long held by many Migos enthusiasts.

“I love the Migos. I think they’re awesome,” Glover told Entertainment Tonight’s Kevin Frazier. “I think they’re the Beatles. And that song [‘Bad and Boujee’] is just amazing.”

If things couldn’t get any better for Quavo, Offset and Takeoff since the rapper/actor’s shoutout, Billboard reports that there has been a 243% increase in the song’s Spotify streams. Its YouTube plays for both the official audio and video streams raked in 3.6 million views between yesterday and today.

Culture is slated to drop January 27 under Quality Control and 300 Entertainment. The project includes the previously released singles, “Call Casting” and “T-Shirt.” Fans can expect features from DJ Khaled, 2 Chainz and Travis Scott.

Check out Donald Glover’s shoutout to Migos and their song “Bad and Boujee” during his Golden Globe acceptance speech below.