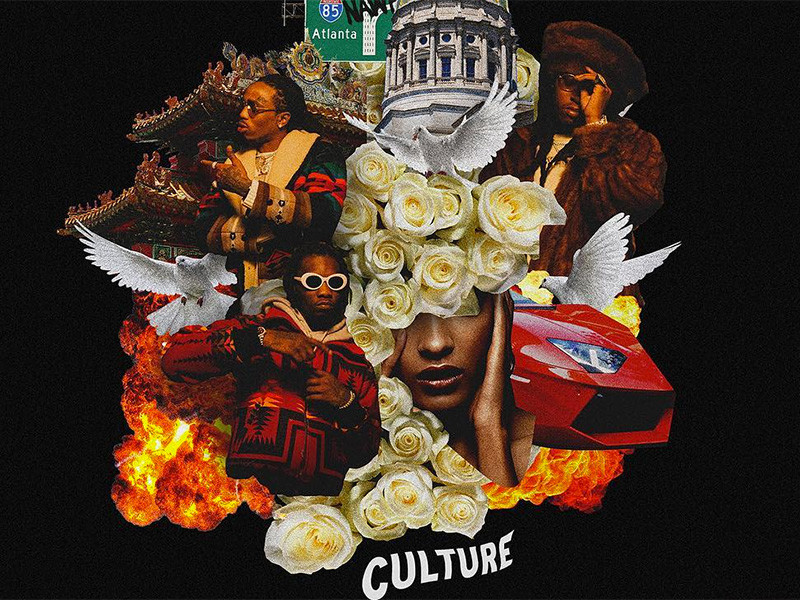 Led by the chart-topping “Bad and Boujee” single with Lil Uzi Vert, the LP also includes singles “T-Shirt” and “Call Casting” among its 13 tracks.

The trio’s last album was 2015’s Yung Rich Nation and since then, they have released several mixtapes including Back to the Bando, Y.R.N. 2 and a series of collaborative projects.

Quavo and Takeoff said back in August of 2015 that they already had their second album ready and discussed the difficulty of promoting Yung Rich Nation without Offset, who was in jail.

The Atlanta rappers had made the lofty prediction that their debut would go diamond, and it hasn’t, but perhaps with all of their current momentum, Culture has a better chance of getting the certification.

Listen below, and scroll down for the tracklist and cover art.

[This article has been updated. The following was first published on January 5, 2017.]

Migos has released another piece of the puzzle for its upcoming “Culture” album — this time, the tracklist. The details for the 12-track outing appeared on iTunes as a pre-order on Thursday (January 5).

Listed features include DJ Khaled on the album’s eponymous opener and 2 Chainz joining in for “Deadz.” Of course, Lil Uzi Vert appears on the Billboard Hot 100-topping/viral sensation “Bad and Boujee.”

Check out the tracklist below and the iTunes pre-order info here.

[This article has been updated. The following was first published on January 3, 2017.]

After weeks of teasing fans with previews of content, Migos has finally graced us with the release date for the upcoming Culture album. The project will arrive on Friday, January 27 according to an Instagram post from the group’s official account.

This comes after group member Quavo called out label 300 Entertainment for delaying the release of the album in October.

On Monday (January 2), the trio also shared the video for “Call Casting,” which will appear on the album.

[This article has been updated. The following was posted on December 16, 2016.]

Another day, another teaser for Migos‘ latest project, Culture.

Although a set release date for Migos’ Culture album has yet to be revealed, the rapping trio is continuing to give fans sneak peeks.

The latest offering came via a video uploaded to Quavo, Offset and Takeoff’s Instagram pages. Uploaded yesterday (December 15), the black-and-white visual features a handful of bars.

“Young, rich nigga in the room … Spent an M and M in June/Took a trip to Cancun/Culture album coming soon,” Takeoff raps.

Quavo merely offered a “C O M I N G S O O N…” as his caption, leaving fans with still no clue as to when Culture will be released.

Last month, fans of the group were treated to a rather lengthy preview of Culture as part of a studio session with Hood Affairs.

Quavo also posted a clip on his IG a couple of weeks ago.

In October of this year, Quavo shared what may serve as the tracklist for Culture. The release of the potential tracklist came just days after the rapper called out 300 Entertainment for stalling on the release of the album, which will serve as Migos’ second studio release.