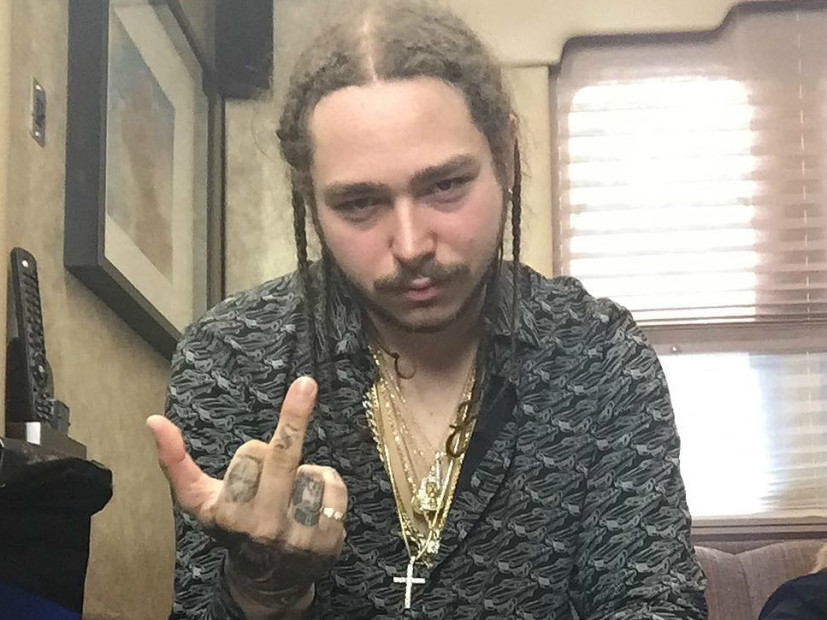 Los Angeles, CA – The releases of established artists like J. Cole and Ab-Soul December 9 made it challenging for some to remember Post Malone’s debut Stoney dropped the same day. Thankfully, a year following his breakout moment with “White Iverson,” his first full length project wasn’t the wash many in Hip Hop expected it would be. Instead, Stoney revealed more depth behind the nonchalant, braid rocking and gold-teeth wearing white guy, for the 21-year-old proved his ability to be a genre-jumping artist rooted in Hip Hop. In the recent HipHopDX review of the project, Contributing Writer Eric Diep had this to say:

“Evaluating Stoney through a Hip Hop perspective, one can see why pundits like Taxstone, for example, can see that his album is better than the abundance of rap releases this year. Post is refreshing to hear, an emerging talent who can craft melodic hooks and infectious songs that stick.”

Taking a quick moment to speak with HipHopDX, Post explains some of Stoney’s curveball moments, the Kanye feature that almost happened, production on the project and his plans for 2017 — outside of guzzling brews.

HipHopDX: The XXL Freshmen controversy stemmed from rumors of you going in a country direction. Despite a project that feels rooted in so many genres, there are some clear influences throughout the project. What kind of rock and country influences made the album?

Post Malone: My dad raised me on all types of music, but Hank Williams Sr., Dwight Yoakam, Fleet Foxes were some of the influences behind some of my curveball tracks on the album like “Leave” and “Feeling Whitney.”

DX: The biggest production moment on “Stoney” is the “Up There” track with Pharrell. How exactly did that come together?

Post Malone: We met at Bonnaroo and we have a couple mutual acquaintances, he wanted to work and of course, I’m a huge fan. We made some other shit too. That might come out soon. You never know.

DX: Stoney features your breakout single “White Iverson” that turned a year old in August. The track went three times platinum. How much did that single influence the direction of the album?

Post Malone: “White Iverson” was just the beginning of a new era of music. It allowed for my music to be heard on a large scale but, has not dictated my sound for the duration of my career musically. Everything on the album came together naturally.

DX: Was there anyone who you wanted to get on the album production and feature wise that didn’t make the final version?

DX:Was there anything you wanted to insure before the album was released considering the line in “No Option” where you talk about everyone asking about the album when you got hot?

Post Malone: I mean it took a while and I’m sorry for that but, it’s here and it’s super lit and I think everyone should check it out. Even grandmas.

DX: How many collaborations with Justin Bieber do you guys have in the stash together outside of “Deja Vu?”

Post Malone: That is a very good question but, I do not remember. I think me, Justin and Bud Light had a few good nights in the studio.

DX: Your August 26 mixtape was primarily produced by FKi 1st. However Stoney has a collective of different producers. What was the mission production wise on this particular project?

Post Malone: August 26 was supposed to first, help promote my album which was set to come out on… August 26, but we know how that went. Second, it was intended to hold the listeners over until the album actually did come out. For my debut project, I wanted to have the strongest production and FKi for sure is that, but I wanted to be diverse and try working with other producers in addition to him.

DX: Where did you get the cover art concept from?

Post Malone: The cover is part of a bigger set of photos that all come together If you look at the pictures from the packaging and the press photos. The whole concept comes from me being myself and remaining calm despite everything around me changing super quick.

DX: What should we expect 2017 to look for Post Malone?

Post Malone: A lot of beer and a lot of shows. Europe in February along with New Zealand and Australia in March with Diplo and a Stoney tour in the spring.

Listen to Stoney below.