Review: Post Malone Does Hip Hop His Way On “Stoney” 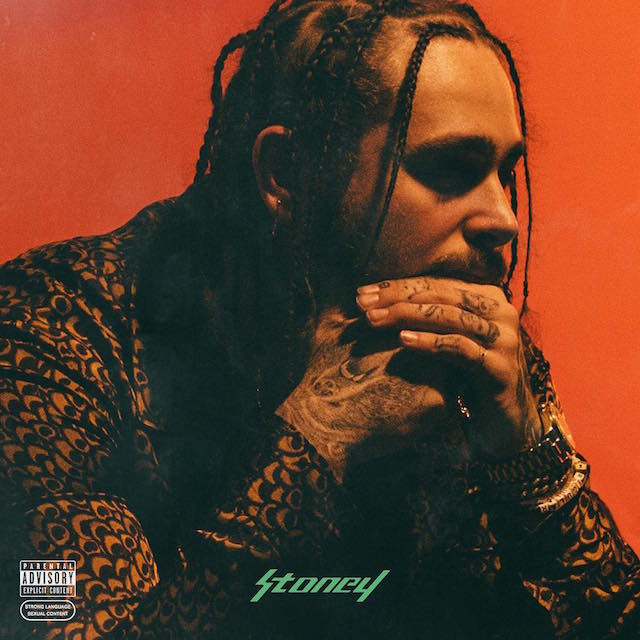 Most of us got put on to Post Malone when “White Iverson” hit the internet last February and became one of the biggest songs of 2015. In hindsight, it’s crazy to think that Post only had less than 500 followers on Twitter at the time and had one other song on his SoundCloud (“That’s It”). Even if his sound was hard to pin down to one category, Post was challenged numerous times by Hip Hop purists just based on his look: he rocked braids, had gold teeth, and was a white guy doing it. His authenticity was questioned again when a video surfaced of him wearing tight jean shorts, a chest-baring track jacket, and a colorful bandana singing lyrics to a throwback ‘80s jam, “Why Don’t You Love Me.” Some people believed he was a “culture vulture,” selectively choosing what he likes about the genre and using it to build his reputation as a rapper. Post’s collaborations with Hip Hop’s elite like Kanye West, 50 Cent, French Montana, 2 Chainz, and DJ Drama only supported that he was being uplifted for the wrong reasons.

Months after he publicly defended his Hip Hop validity, Post’s major label debut (courtesy of Republic Records), Stoney, arrived on the same day as J. Cole’s 4 Your Eyez Only and Ab-Soul’s DWTW – two very foundational projects under the #realhiphop banner by comparison. Can Stoney be criticized by the same metrics as Cole and Soul? Or are we ready to accept Post having the foresight to see the evolution of Hip Hop by breaking glass ceilings with other adaptable collaborators? Stoney adds to the canon of releases from Kodie Shane, D.R.A.M., and Rae Sremmurd who are redefining its standards through their curiosity and made directly for a younger audience.

Born in Syracuse, New York before transplanting to Dallas, Texas, Post Malone is a musician who shifts from genre to genre, as he dabbles in pop (“Deja Vu,” “Feel”), country (“Broken Whiskey Glass, “Feeling Whitney”), and Hip Hop made for radio (“Congratulations” and previously released singles “Go Flex” and “Money Made Me Do It”). Stoney contains guests within the same omni-genre orbit as Justin Bieber, Kehlani, Quavo, as well as producers FKi, Illangelo (of The Weeknd fame), and Pharrell offer the album’s moody delicacies and become kindred spirits of Posty’s world.

Post writes mostly about his emotions while dealing with luxury and fame, even stunting on people who fake flex. He’s also consumed by women, often illustrating himself being intimate with them or having a real connection with a few unnamed sweethearts. In certain reflections, Post’s material can feel empty like he’s calling out for help, but he’ll continue to drown out the world in alcohol (he’s not ashamed to say he needs a Bud Light break in “Yours Truly, Austin Post”) and sipping codeine from broken glasses. “Ice keep pouring and the drink keep flowing/Try to brush it off but it keep on going/Covered in scars but I can’t help show it/Whippin’ in the foreign and tear keeps rollin,” he sings on the break on “I Fall Apart,” which makes you wonder if his pain is actually affecting him or if he’s deliberately creating a lovelorn vibe. Still, he’s growing as an artist, which you can’t really blame on a 21-year-old who resides in L.A. and is inspired by his surroundings. As a full experience, Stoney drags a bit on the lengthy side (especially when the deluxe edition cuts are factored in) and never duplicates its “White Iverson” zenith in terms of musicianship. Yet it still marks a representation of Post surfing life’s unpredictable ups and downs.

Evaluating Stoney through a Hip Hop perspective, one can see why pundits like Taxstone, for example, can see that his album is better than the abundance of rap releases this year. Post is refreshing to hear, an emerging talent who can craft melodic hooks and infectious songs that stick. Especially on “No Option” and “Up There” that shows his potential as a powerhouse on the Billboard Hot 100 charts very soon. During his debut Stoney performance at his album release party in Irving Plaza in New York City was testament to his arrival, as many had hated him initially. If Rae Sremmurd and Gucci Mane’s “Black Beatles” ruling No. 1 for the fifth week is evidence of Hip Hop’s shape-shifting tastes, put Post Malone among the other new wave artists taking us into the future.