Review: J. Cole Illustrates Thug Paradise With "4 Your Eyez Only" 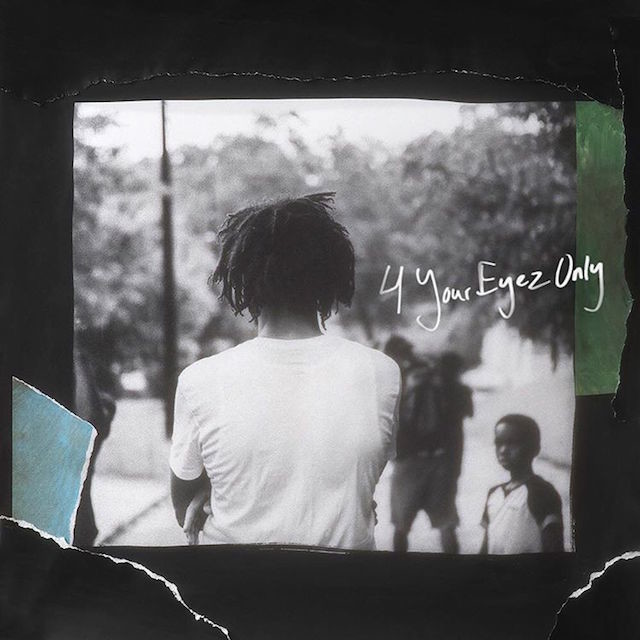 Initially a bright-eyed kid with dreams of being celebrated amongst Hip Hop’s elite, J. Cole claimed a double platinum certification for his last release 2014 Forest Hills Drive, thanks to the RIAA’s updated streaming metrics (and fans’ heavily vested interest). Having built a reputation for remaining quiet and off the grid until he’s prepared to speak through music, Cole’s recent 40-minute documentary served as an appetizer for his subsequent fourth LP, 4 Your Eyez Only.

With countless skeptical cynics all too eager to shoot him down countered by a hive of supporters hanging on his every word, J. Cole has managed to make 4 Your Eyez Only his most ambitious work to date. A conceptual piece about the ins and outs of street anthropology, the title track closes the album with the big reveal that the project is akin to a series of diary entries read to a deceased friend’s daughter after her father’s demise due to fast living.

Fleshing out the theme of his previous album’s deep cut “03 Adolescence” even further, 4 Your Eyez Only conveys the bipolar state of a troubled hoodlum whose invincible bravado masks his vulnerable frailties. Singing from the depths of his tortured soul on the intro “For Whom The Bell Tolls,” J. Cole’s character screams to a higher power for answers as live strings and horns from Elijah Scarlett and co. accentuate his innermost turmoil.

Immediately flashing forward to another scene in the script, the hypnotic “Immortal” reflects the hardened determination of being greater than one’s mental scars. Cinematic in scope, here our conflicted protagonist fights against all odds; hustling backwards while truly wanting better for himself. The turmoil comes to a head on “Ville Mentality,” a moving highlight with Cole’s chilling, passionate, and imperfect harmonies backed by lush instrumentation. By far the most layered production on 4 Your Eyez Only, this heartbreaking piece of the puzzle shows how the story’s lead seeks refuge from hazardous conditions, only to die at the hands of betrayal and leave behind a child who yearns for her beloved male guardian.

In efforts to avoid treading into one-dimensional melodramatic territory, J. Cole conveys the full spectrum of his possibly fictional homeboy’s humanity. “She’s Mine Pt. 1” is a subdued love rap ballad. The song’s sequel embraces the euphoric joys of new fatherhood, though slightly marred as the lullaby takes a swan dive into a misplaced tangent against materialism.

“Change” espouses the virtues of growth and self-development, as J. Cole channels the spirit of Tupac’s trademark rushed, yet fully controlled flow. This is a rather sensible moment compared to “Foldin Clothes,” an arguable misstep which has already sent social media peanut galleries into a frenzy despite its musically progressive thick bassline. Having formerly risked mockery airing out teenage insecurities on the ubiquitous hit “Wet Dreamz,” such carefree sentiments resurface once again in a more grown-up fashion. With absolutely no deeper message behind the song devoted to helping a significant other with laundry, J. Cole yet again fearlessly makes himself a bullseye for jokes ad infinitum.

At least a portion of 4 Your Eyez Only is based on J. Cole’s first-hand experience, as the subtle thumper “Neighbors” recounts the nightmarish day his home studio was raided with unfounded suspicion of illegal solely on the grounds of being black in an affluent area. Despite the creative tier of ambition the album brings, Cole still leaves reasonable doubt as to if his coarse and off-kilter vocals actually reach the level of execution that not only warrants his Teflon popularity but truly deserves praise on the absolute end.

Which results in the album’s solid but unfilled rating. With 4 Your Eyez Only, J. Cole deserves consideration for tugging at the heartstrings of listeners with raw human emotion but still leaves open the door to reach a musical zenith. Snowblind loyal subscribers will flock to crown Cole as a generational superhero, while lazy detractors won’t soon be swayed from steadfast views that he’s human Hip Hop Nyquil. The truth of the matter is J. Cole’s current spot is somewhere in the middle: a suitable seat filler between cycles where his peers make bigger songs but fail to achieve the same perennial status.