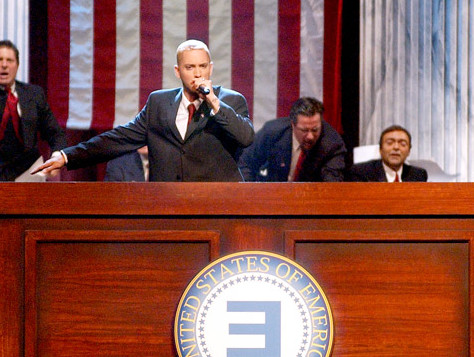 This week in Hip Hop, Eminem released a spanking brand new song going off on Presidential candidate Donald Trump. Oh, and he also announced that he’s working on a new album. Elsewhere, Nicki Minaj explains why she is okay with Meek Mill’s public beefs with Drake and The Game. Lastly, Daz Dillinger questions how Suge Knight and Tupac’s relationships were portrayed in Surviving Compton.

Twitter reacted to Em’s announcement of a new album and “Campaign Speech” with mixed reaction. Some were elated some wondered if anyone still listening to the Slim Shady in 2016?

Nicki Minaj: All Publicity Is Good Publicity For Meek Mill

Nicki Minaj spoke with Hot 97‘s Ebro In The Morning and gave her thoughts on Meek Mill’s string of beefs with The Game, Drake and now Philly legend Beanie Sigel.

“I do not believe there’s any such thing as negative publicity,” Nicki Minaj says of her man’s public feuds. “And that’s what I tell him. You must have something that people see in you. Look, there’s a lot of things that I know about other rappers that I keep quiet.”

Meek even got into a lil’ quiet social media war with her ex Safaree Samuels who insinuated on Twitter that he wanted to send Nicki a “WYD big head” text after seeing her TIDAL performance.

Meek responded in the most Meek way possible. Pure pettiness.

A scene where it appears Suge punked ‘Pac was not something that would ever happen he asserts.

“Crowns & Crosses, the crowns represent moments of triumph, moments where you’re just bold and, you know, ‘Praise God and Hallelujah’ and all those good moments,” Bizzle reveals. “And then the crosses represent the cross that you have to bear in this life, the struggles, the pain that you have to deal with, while still trying to keep your joy. Then also, while we’re on this earth, we’re guaranteed suffering. The Bible never tells us that we’re gonna have Heaven on Earth like that. It tells us that there’s going to be suffering. So we carry our crosses now and later on we get our crowns.”

DX’s Managing Editor Chris Mitchell caught up with Kid Capri to get the inside scoop on Top Tier, a project he’s been promoting for years.

“Well, the reason why I’ve been promoting it for that long and not putting it out because I wanted to embed it in people’s heads,” he says. “It’s kinda like the Detox effect with what Dr. Dre is doing. Let ‘em wait for it and even if it dies out of they head, bring it back through promotion and let them say ‘Damn wasn’t that album supposed to come out a long time ago?’ But oh no it didn’t come out, so now you got something to look forward to. It was just a matter of doing that and it was unusual because no one had ever done a battle rapper album. So that’s why it became special.”