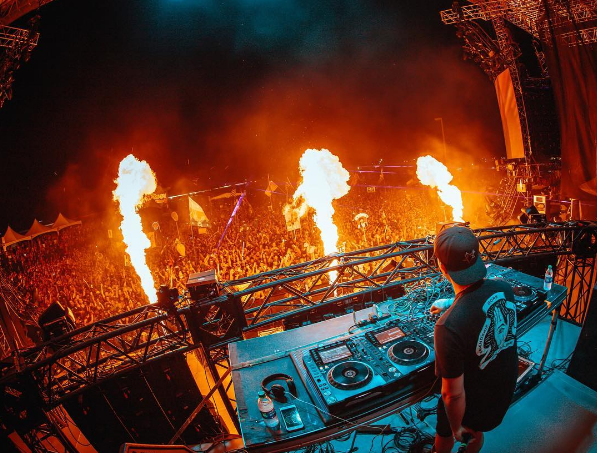 Party-starting producer Borgore and his Buygore label are hosting a stage at Electric Zoo this year, featuring performances by Juicy J and Lil Dicky. This is the first time that Buygore has hosted a festival stage in the United States. For those who are unaware, this is the eighth year Electric Zoo will be taking over Randall’s Island Park in New York over Labor Day Weekend.

Borgore, the Israeli superstar, is no stranger to the Hip Hop world, having collaborated with artists like G-Eazy and Waka Flocka Flame. He has also worked with crossover artists like Miley Cyrus and reggae superstar Barrington Levy.

HipHopDX recently caught up with the dubstep producer and DJ via a phone conversation to discuss how his roster came together and why he feels it’s important to include rappers on an electronic music festival lineup.

DX: You’re pretty well-known in the EDM world, who is Borgore to the Hip Hop audience?

Borgore: I make super aggressive electronic music. It resembles more like an urban world, more than the EDM world. My beats are super influenced by Atlanta. I grew up listening to Ludacris and Waka Flocka, who I eventually worked with. All my favorite producers are people like Southside, Sonny Digital, and Lex Luger. Definitely more urban.

Borgore: Dubstep. Right now, I bet you most are introduced in the EDM world, to acts like Skrillex. Dubstep started as a combination between 2-step and dub, more like reggae. It came from the Caribbean world. I took it more to some weird place between metal and Hip Hop. It’s hard to explain.

DX: You played a variety of instruments growing up, what was your favorite?

Borgore: Honestly I love all instruments, it just depends what mood I woke up in that morning. The one I spend the most time on is piano. It’s just the prettiest instrument in the whole world.

DX: How does that connect to your sound now?

Borgore: The fact that I can play the piano to basically every song I hear on the radio. It takes me about 30 seconds to play it on the piano. I can play it in my head. Listening to the radio gives me a ton of inspiration. That’s the benefit of playing piano and knowing classical music.

DX: Let’s talk about your new label Buygore. What was the creative process behind that and how did you come up with the name?

Borgore: What happened is, when I started making music, I started making EDM. I had rappers on it. The lyrics were something that wouldn’t offend anyone in the Hip Hop world, but people in the EDM world were super offended. The Internet loved it. I was headlining festivals, touring, doing all this shit for a year and a half, but no label would pick me up.

I even had a song in the works with Miley Cyrus, and still getting no love. So I was like “fuck y’all,” and I did whatever the fuck I wanted.

The name Buygore… I was stuck on what to call it. On my way to the airport, I was flying Emirates, one of the biggest airlines in the world. It’s super successful. A bunch of sports teams are using it in Barcelona right now. Then I just call myself Buygore, just as simple as possible.

DX: How have you used the label for your own music?

Borgore: I release 99% of my music on my own label. Today, the major labels have learned, they go on Soundcloud and search for up and comers. Back in the day, the labels were all about “We know better, don’t care for the Internet, fuck social media.” When Buygore started, it was all about us going on Soundcloud and looking for the future sound, what we think is about to pop. We helped a ton of kids, a lot of people started their career at Buygore and are now making millions.

The whole idea of Buygore is now something implemented in major labels. It’s to help people grow.

DX: What is your take on the current state of Hip Hop, with the Lil Uzis and Lil Yachtys?

Borgore: I honestly love it. I love Lil Uzi. One of my best friends is Carnage. I love his track “WYDW.” I call it Soundcloud Hip Hop. Yachty and D.R.A.M., it works. It pops off on the Internet and people love it. Eventually, they make it to mainstream. “Broccoli” is number 2 on iTunes right now, it’s such a good tune.

I like the fact the state of music, EDM or Hip Hop, no matter what it is, any kid can go and become something if he has good music, if he has good vision. Yachty and all of them, they weren’t signed by someone and then got their career. They started their career from nothing through the Internet, through real fans.

DX: How did your roster come about?

Borgore: I called people and asked if they wanted to play.

DX: Was that you personally?

Borgore: No, my team. We had history. We were doing parties for a while now. Every party we did sold out. We’re well-known for bringing the turn up. It’s not like the EDM crowd, it’s just a party. Last time we did a party in Los Angeles, someone got kicked out for getting a blow job on the dance floor. It’s pretty ratchet, but in a good way. It’s out of control.

The roster we put for Electric Zoo is pretty interesting because for one, we have Hip Hop: Juicy J and Lil Dicky. But even EDM, it’s not what Hip Hop grasps as EDM, that cheesy, happy chords, tripping on Molly. It’s more like all of us play Hip Hop, and mix Hip Hop with electronic music you probably haven’t heard before. But it works. It’s nothing like you would describe EDM, you feel me? It’s what we do.

I had a song with G-Eazy, Waka, Diplo… we’re not all really EDM.

DX: How was working with G-Eazy? How did you guys connect?

Borgore: Forbes made a big article about my house that I bought. It’s a pretty nice house. For someone who’s making for himself in music, it’s a pretty nice house. I was pretty happy about it. Forbes is a big deal. I sat down and wrote a song about how I made it to Forbes. I thought there was potential, and I thought my rap was good. I always write my own songs … but sometimes I pitch it to other people.

I pitched this one to G-Eazy and said, “Yo what do you think?” He didn’t use my words, but liked the concept about getting into Forbes. He rewrote the whole thing and made it 10x better. [Forbes] is huge.

DX: Why do you think it’s important to include rappers on your lineup?

Borgore: Because again all the people from my label, producers and people who listen to our music, we like Hip Hop. It’s our religion. We don’t listen to EDM. What we produce is leaning towards Hip Hop.

I feel like 2016, the whole problem of cheesy EDM is bursting … kind of. More and more people are just down for some like cool music. It’s important for my label, and myself, that we will bring cool sounds. I think the lineup we curated for Electric Zoo is incredible.

By the way, at Electric Zoo last year, I brought out G-Eazy to sing “Forbes.” That was the day we released the sound.

DX: Do you feel pressure?

Borgore: There’s always pressure. Any artist will tell you there’s pressure. We don’t work 9-to-5, there’s no science between what we’re doing. We always have to try things and hope people fuck with it. Always have to re-invent yourself. I can’t make the same songs from 7 years ago.

There’s always tons of pressure. That’s what I wake up in the morning for, trying to figure out what’s next, or else life would be boring.

Borgore: I really want to sit down with Southside, something we are planning on doing. In general, it’s the most obvious answer maybe, I really want to work with Drake. I don’t think he’s released a song I didn’t like. [Laughs]. He’s just so fucking good.

There’s so many people I want to work with, so many records coming out all the time. It’s super high paced too as well. Once, Yo Gotti was the hottest thing to me. Then [Young] Dolph came out with “Preach.” I was like, “This is the hottest shit.” Every week someone comes out with some heat. There’s so much shit happening, and so many good people to work with.

DX: I just watched your “100s” music video. Is this based on real life? Are you cocky?

Borgore: I mean, to a certain extent. The fact that I released the song with these lyrics, is kinda cocky. At the same time, I’m very thankful. I’m pretty humble about things, I hope at least.

Still, my family is most important thing to me. I never forget where I came from, and I’m proud of everything I’ve achieved.