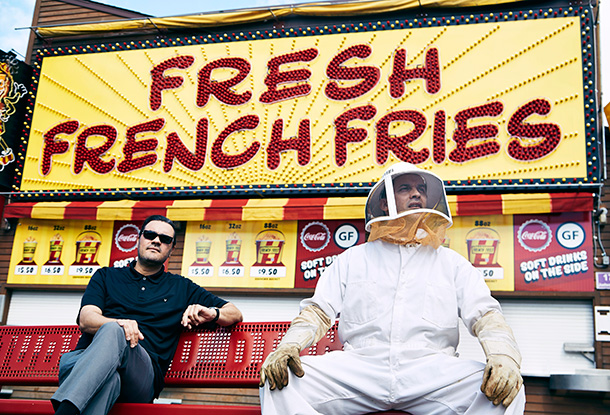 Rapper Slug and producer Ant have been making music together for more than 20 years, and over that time their struggles have evolved.

“I make music that was born from a place of struggle and like some of my contemporaries, we outgrow some of those struggles, especially the financial ones because we’re able to sell this music that we made that was made from struggle,” Slug said in an interview on The Current’s Oake & Riley morning radio show in Minnesota Tuesday (June 21). “So it creates this thing where when you’re … figuring out what to write about, you want to write about struggles but you can’t — I’m not gonna write about trying to pay my phone bill ’cause my phone bill’s paid … I have a tendency to try and tap into whatever it is I’m going through at the moment. I found these positions of struggle that I still deal with and I focused on those.”

The group will be releasing its seventh studio album on August 12 via Rhymesayers. Fishing Blues will be the first official full-length project since 2014’s Southsiders, which debuted in the No. 8 position on the Billboard 200 album chart. The Minneapolis, Minnesota duo has released a steady stream of singles over the last year, though none of them will appear on the new album.

Fishing Blues features spots from DOOM, Kool Keith, Aesop Rock, The Grouch and more. Slug said that the album was supposed to be named something else, but he and Ant saw a boat with the new title written on it and they knew they had to change it.

Check out the brand new video for debut single “Ringo” below followed by the Fishing Blues cover art, tracklist and tour schedule.

Tickets go on sale on June 24.