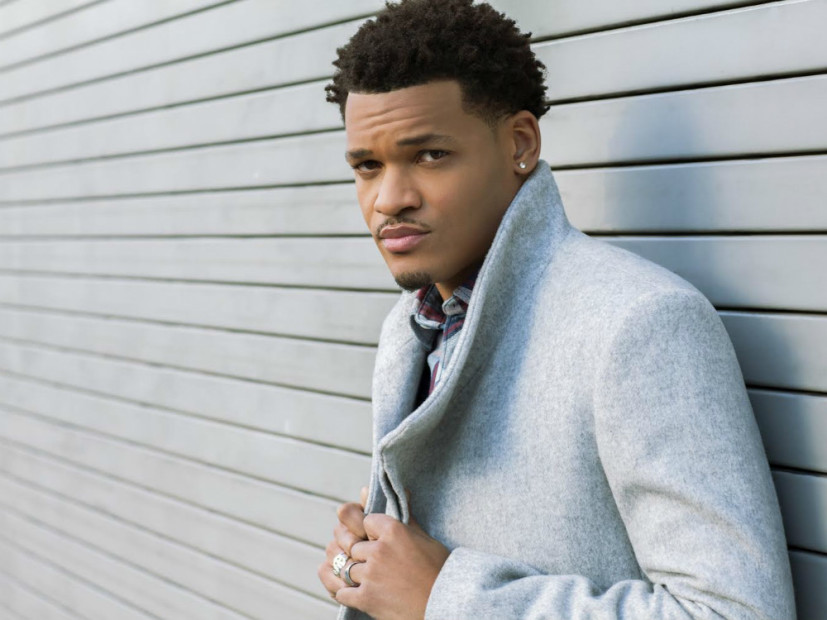 If one word could describe Christon Gray’s career it would be consistency. The Columbus, Ohio native has made a name for himself through his authentic transparency. The same honest storytelling that appeared on his 2012 mixtape Body Art was carried through the critically-acclaimed School of Roses and continues through his latest output, The Glory Album, which was released in March.

After signing with Kirk Franklin’s Fo Yo Soul Recordings, an imprint of RCA Records, last year, Gray is ready for a fresh start. The 30-year-old was on the independent Christian label Collision Records where he was a member of the group We Live As Kings (W.L.A.K. for short) and released School of Roses. The LP, although it reached the 44th spot on Billboard’s Top 200 albums chart, garnered much criticism from the religious community. The album was Gray’s own journey through lust, pride and greed as he sought true love.

On The Glory Album cut “50 Shades,” Gray includes a voicemail from the legendary Gospel artist telling him “You are free.” Gray met with Franklin in Dallas, Fo Yo Soul’s home base, to detail the album. After the trip, Franklin sent his protege the message as an affirmation that Gray’s creative direction was on the right path. Gray says that this proclamation rang true for many different reasons.

“It was hard transitioning from the last label I was with,” he says. “Going from independent to major label system was hard. Honestly, to be a little extra vulnerable, there was some people who were trying to ruin my career during that transition for real, just taking a lot of the content from my last album, which was based on real life. It’s not like I was just being hypothetical. You hear the music and it’s like, ’Something’s going on.’ And it was, but there was a lot of people I feel like tried to take it and make a spectacle of me within the industry, not so much fans and that was hard going through that. So you’re hearing kinda like Kirk telling me, ‘Yo, you can be yourself here, bro. I can be a sounding board for you. I’ve been through anything that you’re probably telling me about already in some way, shape or form.’”

Even though he considers himself the mentee, Gray says that Franklin reached out to him for prayer as he went to work with Yeezy. He says that Franklin knew there would be backlash, but he wanted to live according to his higher purpose.

“Kirk stands for something,” Gray says. “He’s not trying to just be associated with any and everything, but he loves Kanye and he loves everybody. He loves people. But you know, people are gonna look at Kirk Franklin. I feel like he knew he was gonna get heat for it, so he just wanted to make sure that this motives was right.”

Gray admits to being a little starstruck at the heavyweights that Franklin got to work with and admires Franklin for checking his intentions before going to the studio.

“He just hit me up and just asked for prayer that if it was an environment that did not really fit what he’s trying to do, that he would have the strength to say no,” he says, “‘cause it is Kanye and they had legends in the room. I wanted to be in the room. Andre 3000 was in there and I was like, ‘Bruh, can we meet?'”

When the criticism came, Franklin seemed ready. Gray says that both he and his mentor see West as a person and appreciate his music and persona.

“He seemed like he was a bit somber about it,” Gray says of Franklin, “but he knew it was the right decision. I really respect him for being so close with Kanye and being so close with Kanye and sticking up for him, man. I really do. Ye’s like, is one of my biggest musical inspirations, but just beyond that, I’ve listened to him and I’ve just heard just a dude, just a regular dude. He’s passionate about what he believes and he speaks about it. I think more people should do that and Kirk recognizes that, too. So I don’t think he has a problem rocking with him.”

While West, with 21 Grammys and multiple platinum projects, might appear to have reached the pinnacle of success in the music industry, Gray says that he has found his own pocket of success that inspired The Glory Album. He has worked with Lecrae on multiple projects, including Church Clothes and its sequel and has continued to build his brand.

“Glory for me is a place,” he says. “It’s hard for people to picture it, to get an image of it, so I say it’s a place that I’m trying to get to. It’s my journey from glory to glory. It’s feeling like I’ve reached one place already, but trying to get to another place. It’s also something that I fight for, for both myself, for my family and for my fans.”

One of the tracks that reflects Gray moving forward from what people might expect from his soulful sound is “Stop Me,” a confrontational banger that reveals deeper layers as it unfolds.

“I had a lot to talk about, because my music is so reflective a lot of times, I wanted to step out of that box and talk about some other things that were on my mind,” he says. “So I had to start off with talking about the church because I’m heavily involved in the church community and as far as what people talk about and what they do in the name of Jesus. I wanted to dismantle what I call the Pharisee land. You hear me talking in that first verse a lot about how people treat each other in this so-called body of Christ and I think it’s whack. I never fit that mold and I hate it. People want my head for it. I’m like, ‘That’s ok.’ I got a whole crew of people who know the rules, but we hate the way that you trying to clown us right now. So the song is very, like a lot of my music, a double entendre. On one hand, I’m saying, like you can’t stop what’s going on. I can’t even stop what’s going on. This is God doing this. On the other hand, I’m like sitting in counseling sessions like please stop me. I feel like I’m going crazy. So it’s both. After two verses of talking about issues that need to be spoken about from someone who’s just trying to have a Godly perspective, the end verse is me just giving a look into my life ‘cause I ain’t got it all together.”

Another song with multiple meanings is “Blackmail,” which details the struggle of a Black man as he courts a White woman. Gray drew inspiration on interracial relationships from the experiences he has seen of his sister who is dating a White man and his own experiences as a Black man in the United States.

“I am a Black male, so I feel like the injustice has become, we’ve become conditioned to accept it, which sucks,” he says. “I also don’t know that hostility is the best way to approach it because I think that’s expected now. So with ‘Blackmail,” I even mentioned kinda my feelings on that injustice.”

In writing the song, Gray explored the way he wanted to present his story. With a race war raging in America, he wanted to be heard in a new way.

I’m like, ‘How do I approach this topic without getting ignored?’ I could scream at the top of my lungs. I could do a Marvin Gaye, ‘What’s Going On?’ type vibe. I could stand on the grass barefoot and just cry about my Blackness. But I wanted to include the issue of love and how does an interracial couple love in the middle of racial injustice.”

He explains that it is a decision from both parties to work together towards understanding and healing. The song is about two lovers, but the idea applies to all of society and the need for acceptance of Black and White harmony will be even greater in the future.

“It’s a decision from both parties to let love be the catalyst and work through these issues because hostility will never get us anywhere,” he says. “And I think Black people gotta think past Black people because I think the natural evolution of our society is gonna be much more interracial in the future and I think White people gotta stop just thinking about White people. It’s gonna be a hybrid of both and we’re seeing that more now than ever before.”

Even though this song was inspired by his sister’s relationship, Gray has discussed his own love life throughout his career. He celebrates his seventh wedding anniversary this year and now has a four-year-old daughter who he hopes he can pass down lessons to.

“Now in society, I feel like the only people defending the image of a woman are women,” he says. “I think that we gotta rely on Beyonce’s ‘Formation’ to really establish the position and power that a woman has. I don’t like that it has to be that way. I know that there’s a lot of stereotypes created by men and that they just play to women to be objects in different ways and that some women have even accepted it and try to combat it by being more of that but telling men they have nothing to do with it. Or we can just tell women how beautiful the are more often and really appreciate them. Women as a whole, not just from a companionship standpoint, but my daughter, she’s amazing. People need to know that. She needs to know that when she grows up. She needs to be blind to society’s view and know that her father loves her.”

Gray says he wants to affect one person at a time with his music, but his platform is getting larger and larger. He was featured with W.L.A.K. on a Super Bowl commercial for American Idol when the Seattle Seahawks demolished the Denver Broncos in 2014.

“All I did at the party was tell the people to listen to my commercial,” he says. “I was like, ’Yo, this game sucks. Check this out tho, y’all. Y’all hear this?’”

More recently, “Stop Me” and another The Glory Album cut, “Open Door,” was featured on ESPN. Gray has trouble finding words to describe his excitement and what these placements mean to his platform.

“You work on this and you hope it makes some waves, but you don’t know,” he says. “You don’t know if it’s gonna be good enough. You don’t know if people are gonna love it as much as people in the studio. It was very affirming to see that. It was very humbling to hear the comments. It was very humbling to hear how much ESPN loved it. It’s still mind-blowing….I’m starting to see that this music is doing more than just touch my immediate fanbase. It’s helping me gain new ones. Bring them over to the conversation table. Steph Curry’s shooting threes to ‘Stop Me.’ What’s good? The song about the city that I grew up in is playing on Peyton Manning’s retirement speech, ‘Open Door.’ What’s good? This is amazing, right?”