The Houston, Texas-born emcee said on BET’s “106 & Park” that the mixtape, his second, is scheduled for a November 7 release. He says that the collection of records will include production by Boi-1da, David Banner, and KE On The Track, among others. Crae premiered his new single “I’m Turnt” from Church Clothes 2 on 106 & Park as well. Church Clothes 2 is hosted by DJ Don Cannon like the first installment of the series.

When asked what makes Church Clothes 1 different from volume 2, Lecrae says that he has unique content and matured as an artist during the process of Church Clothes 2.

“Well you know, one is just maturity,” Lecrae said in an interview with BET. “As I have matured as a person, you get to hear the growth of me as an artist. Two, is a lot more comfortability in my own skin and getting to say some of the things that I will uniquely say but great production, got David Banner and Boi-1da on there. Features from Paul Wall, B.o.B and Kevin Ross, it’s going to be a good situation.”

On “106 & Park Backstage,” the Grammy Award-winning rapper explained why he decided to go the mixtape route instead of doing an album.

“I was at SXSW and a lot of people ran up to me like ‘Lecrae, Lecrae, Lecrae,’ and a lot of the feedback I got was that they found about me through the mixtape [Church Clothes 1],” the rapper said. “Even though I have been doing this for a while, that mixtape really helped people kind of taste and see what I’m about. Part 2 of the mixtape just allows you to do some stuff that you wouldn’t normally do on the album. You can just rap. Nothing but rapping and that’s it and scale down production if you want to so that’s really why I did it.”

Lecrae says that he has conversations about life and faith with many industry professionals.

“Oh man, lots of guys. Whoever wants to go there, we go there,” the rapper explains. “At the end of the day, I think a lot of people got to understand that rappers are people. Artists are people and people wrestle with all types of issues and they have questions about stuff. Anybody who I’ve had conversations with, everybody from The Game, to K.R.I.T. [Big K.R.I.T.], to Kendrick [Kendrick Lamar], it’s not like ‘Hey man, so how was your performance today.’ It’s just life and so on and so forth. So sometimes faith comes up and sometimes other aspects of life come up.”

Lecrae released his Grammy award-winning album, Gravity, in September of 2012 through his Reach Records imprint. His Church Clothes 1 mixtape is nearing 500,000 downloads on DatPiff.com and is considered platinum by them. The faith-based lyricist has collaborated with artists like Big K.R.I.T., No Malice of Clipse, Andy Mineo, Chaka Khan and 9th Wonder.

The Church Clothes 2 cover art is as follows: 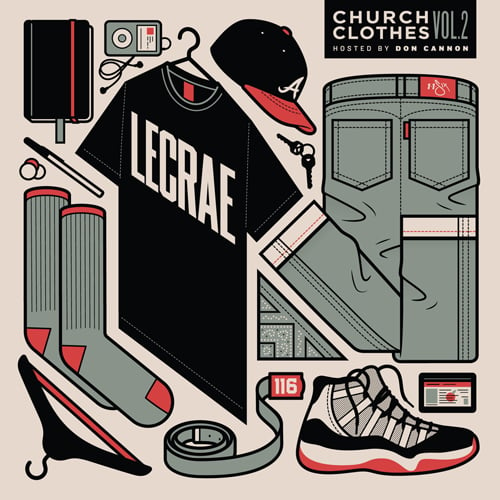 Update: The tracklisting and stream for the album can be found below.