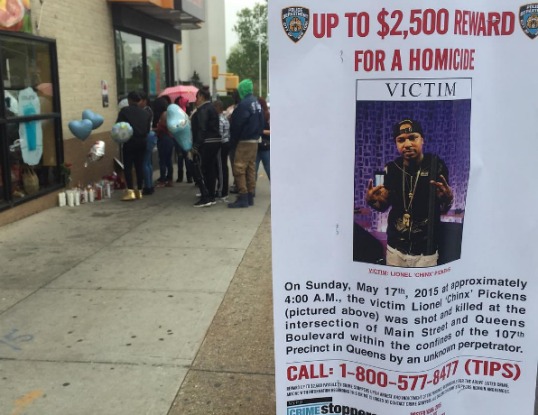 Queens, NY – Tuesday (May 17) was the one-year anniversary of Chinx’s murder, which occurred in his own Queens neighborhood. Since then, no arrests have been made nor have the police announced any prime suspects.

One person understandably still searching for answers is his mother Veronica Clinton.

During yesterday’s vigil to commemorate the anniversary of her son’s death, she made some bold statements directed at both Puff Daddy and French Montana’s lack of support.

“[They] need to come out and see me,” she told FOX 5 News’ Lisa Evers matter-of-factly before naming them both, “P. Diddy and French.”

When asked by Evers the exact reason she wants to meet with the superstar rappers, she snapped “Because I’m Lionel’s mother and I need answers. That’s why.” Clinton feels that both Diddy and French Montana disrespected her at Chinx’s funeral.

“I asked French why did y’all do that to my child and he said ‘because he wouldn’t listen,’ she claimed. “I said you’re not his father, but I am his mother.”

She also believes her son’s death is “connected” to the murder of fellow Far Rockaway rapper Stack Bundles, who was murdered in the summer of 2007.

Born Lionel Pickens in Far Rockaway, Queens, Chinx was steadily building a name for himself underneath French Montana’s Coke Boys Music imprint. He left behind four children and a widow, at just 31 years of age. His second posthumous album, Legends Never Die, is slated to be released on July 8 on eOne Entertainment. The first single, “Like This,” featuring Chrisette Michele is streaming now.

Take a look at the video below.