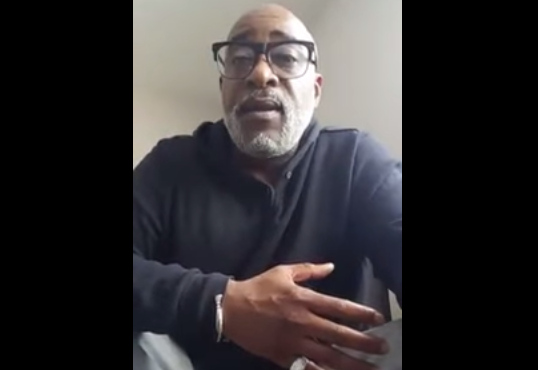 Bronx, NY – Hip Hop pioneer Afrika Bambaataa’s child molestation accusations have brought him very few allies, save for KRS-One, who indubitably felt the burn for his initial comments that not only defended the Zulu Nation founder but dismissed the alleged victims all the same.

Add Bronx native OG Half Pint to the list of recent KRS-One deflectors. While conducting an interview facilitated by Doggie Diamonds TV, Half Pint claimed to have a personal unsavory encounter with Bambaataa at just 12-years-old, where he claimed the man behind “Planet Rock” attempted to test his willingness by barging into the bathroom and whipping out his own penis before he could finish peeing.

In that very same interview, Half Pint redirected his fury towards KRS, alluding to know first hand that him and Bam were cohorts with one another, sexually that is.

“KRS-One, you stupid muthafucka,” he bellowed before adding “Kris, I know Bam sucked your dick.”

“It’s no way that you sat there and you tried to like ‘I ain’t got nothing with that.’ You a man, you a man…you don’t have nothing to do with another man touching little kids. So that mean you would have no problem with Bam sucking the little boys off in your family and putting his finger in they ass. That’s you KRS-One. You’s a fuckin’ dickhead. Yo, you stupid, yo.”

While sitting in on N.O.R.E. and DJ EFN’s “Drink Champs” podcast (an interview that has increasingly become harder to locate across the Internet), The Blastmaster favored the culture above all saying, “Personally — me personally – I don’t give a fuck. Look, if somebody was harmed or whatever, y’all gotta deal with that shit. Deal with it. That don’t stop Hip Hop. That don’t stop what you did for Hip Hop. It don’t take away none of it. History is history. But deal with that. That’s personal” when asked about the Bambaataa allegations.

KRS-One released a statement shortly afterwards, clarifying that he did care about any victims if the accusations turned out to be true but as far as he was concerned, everything tied to Bambaataa’s name regarding the ordeal was merely “gossip and sensationalism.”

For that, Half Pint is calling for a boycott of the Hip Hop legend.

“Now all arrangements with this nigga; events with KRS-One, DEAD ’em!” he continued. “For you to say that, I know [Bam] sucked your dick. He had to! He had to! Y’all either had to do things together for you to say that—I was in awe. I did start watching you during the years as we started getting older and I started seeing ‘This nigga stupid.’ I seen you getting stupid so you saying that, it don’t surprise me. You’s a fuckin’ dummy. KRS-Asshole. That’s your name now, KRS-Asshole.”

The slanderous KRS-One commentary is preset in the YouTube video below.