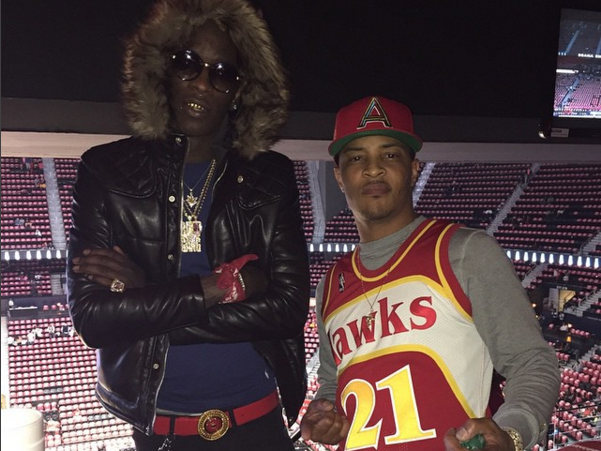 The Atlanta group is made up of TIP (aka T.I.), Young Thug, Shad Da God, London Jae and YSL Duke. The Bankroll Mafia album is comprised of 17 songs and includes verses from Peewee Roscoe, Lil Yachty and the late Bankroll Fresh.

T.I. is also working on his The Dime Trap album.

(This article was first published on April 15, 2016 and is as follows.)
Taking to Instagram last night (April 14), the group uploaded what appears to be the project’s cover art along with the caption “4:22,” likely meaning April 22.Bankroll Mafia, the Atlanta-based supergroup comprised of TIP, Young Thug, Shad Da God and Peewee Roscoe, have announced the release date for their yet-untitled debut album.

Thus far, Bankroll Mafia have released two singles, “Out My Face” and “Bankrolls On Deck.”

When the supergroup was first formed last year, its members included TIP, Young Thug, Shad Da God and Peewee Roscoe. However, last November, Roscoe was sentenced to 10 years in prison for, among other charges, shooting at Lil Wayne’s tour bus in April.

The cover art for Bankroll Mafia’s yet-untitled, forthcoming album can be viewed below: