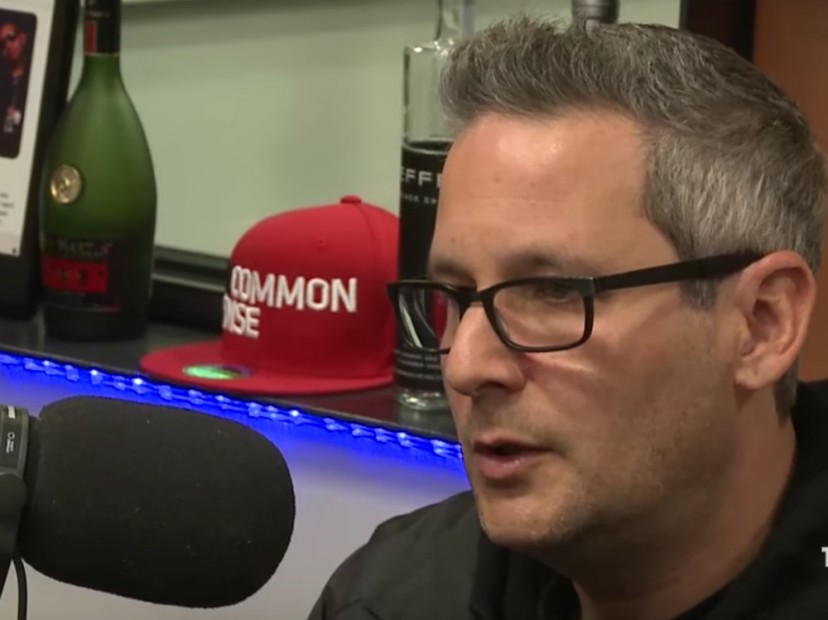 Kanye West has shown his excitement in his partnership with adidas, calling it a family and giving the brand a shoutout on his most recent album, The Life of Pablo, when he dissed Nike on “Facts.”

adidas’ Global Director Jon Wexler sat down for an interview with The Breakfast Club to detail West’s partnership with the brand. He is asked by the hosts what he thinks of West’s claim in “Facts” that “Yeezy just jumped over Jumpman,” meaning his Yeezy brand has overtaken Nike’s Jordan brand with Michael Jordan.

“My whole thing about what we’re doing with Yeezy is it’s so different,” Wexler says. “We’re in our own lane. We’re not really trying to look at what they’re doing. They took an athlete who no question was the most dominant in the 80s and 90s that’s ever played the game in that era.”

He notes that social media and the constant presence of celebrities has given adidas a unique opportunity to do something with West today that Nike was never able to do with the five-time NBA MVP.

“Through social media, these guys have no off-season in the celebrity side of the industry,” he says. “The athletes have a seasonality in the business, which means they’re going to be dominating ESPN or sports on the news a certain time, but the non-sports side of that, the entertainment and influencers side of it, those guys are 24/7 creating a news cycle. So I think that adidas is trying to do something completely different with Kanye.”

As a Hip Hop fan himself, Wexler says he enjoys working with artists to further the adidas brand. Run DMC was one of the first advocates for adidas in the music industry.

“It’s surreal to me and to get to have a relationship with DMC and to talk to those guys on a pretty frequent basis,” Wexler, who is also a fan of Public Enemy and Schoolly D, says. “It’s awe-inspiring.”

Wexler sees that adidas’ relationship with Hip Hop came full circle when West hosted his Yeezy Season 3 fashion show and The Life of Pablo premiere at Madison Square Garden last month. In 1986, Run DMC wowed adidas executive Angelo Anastasio with their performance of “My adidas” at the same New York venue where West hosted his fashion show. Wexler, who calls the Yeezy Season 3 event “unorthodox” and says it “broke convention,” says that West came to the brand with the idea for his the show in November 2014. The company could have done the show in February 2015 with the release of the Yeezy 750s, but multiple factors led to the delay.

“We put a pin in it and said let’s work backwards from the right date and do something really epic,” he says. “Fortunately it played out and worked great and people watched it. That was quite a production.”

West has made headlines for his posts on Twitter that range from social commentary to self-promotion. Some, including reportedly his wife, Kim Kardashian West, have been frustrated with his off-the-cuff remarks on the public forum. Wexler, however, says he doesn’t mind having a person with West’s passion representing the company.

“I think the dude has a great sense of humor and it gets lost because people have a certain perception of him,” he says. “So I read a lot of that stuff, and I’m just like, whatever, he gives us shine and adidas shows up on there. Yeah, it’s energy and he has an incredible way of sort of hacking culture almost like reverse hacking it. He puts all his vulnerabilities out there and people like him more. Where most people try to hide that stuff with this perfection that everyone knows does not exist. So I respect him for being honest.”

In general, Wexler confirms the family atmosphere that the brand with the three stripes has created. In January, West said he wouldn’t re-sign with Nike even for a billion dollars because to him, money can’t buy the relational aspect. Wexler says that all of the adidas partners, including Snoop Dogg and Pharrell, support each other.

“At least the face of it that I see is mostly like brotherly,” he says. “They all want that shoe. Snoop wants that shoe from that artist cause he wants to have it in his collection because he’s part of the family. Kanye has requested other sneakers from other people we’ve done. Sometimes, I’m wondering if he’s going to wear them or if he wants to cut ’em open and look at the technology and design of ’em cause he’s so mad scientist, product guy. Then Pharrell, same thing. He was wearing Yeezys the other day. Just ’cause it’s such a community and we have such a tight-knit relationship with all these partners of ours, we’re very blessed.”

View adidas’ Jon Wexler’s interview about Kanye West and the company’s history below: