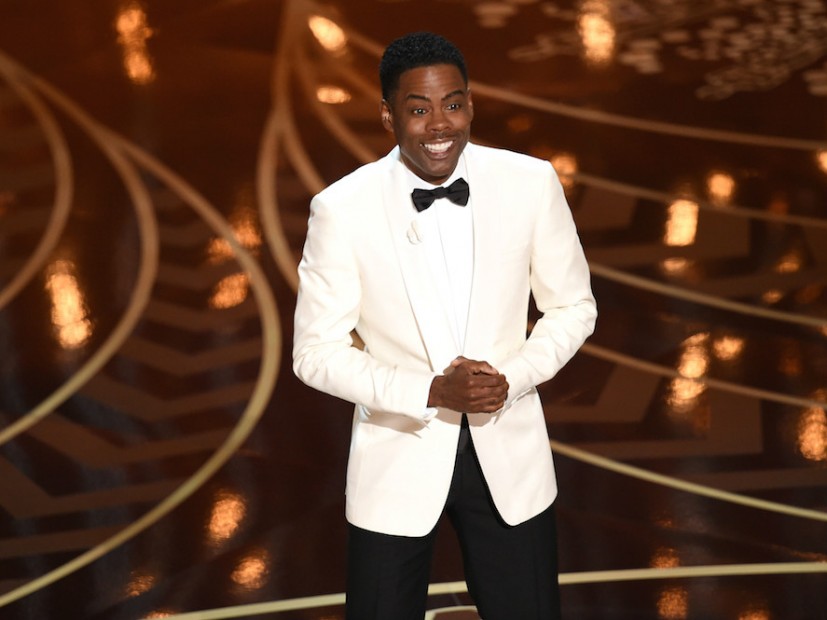 Chris Rock is the host for the 88th Annual Oscar Awards tonight (February 28).

During his opening monologue for the show, he addresses the controversy that surrounded the Academy after no Black actors or actresses were nominated in the leading and supporting role categories.

“I counted at least 15 Black people in that montage,” Rock says to start his piece.

Along the way, the comedian addresses those who asked him to not host the show in order to protest the lack of diversity recognized by the Academy.

“Well I’m here at the Academy Awards, otherwise known as the White People’s Choice Awards,” he says. “You realize if they nominated hosts, I wouldn’t even get this job. So you’d be watching Neil Patrick Harris right now. Here’s the crazy thing. This is the wildest, craziest Oscars to ever host ’cause we’ve got all this controversy, no Black nominees. People are like, ‘Chris, you should boycott. Chris you should quit. You should quit.’ How come it’s only unemployed people that tell you to quit something? No one with a job ever tells you to quit. So I thought about quitting. I thought about it real hard. But I realize they’re gonna have the Oscars anyway. They’re not gonna cancel the Oscars because I quit. And the last thing I need is to lose another job to Kevin Hart. I don’t need that. Kevin right there. Kevin makes movies fast. Every month. Porno stars don’t make movies that fast.”

Rock then questions why people called for a boycott of the show, including Jada Pinkett Smith and her husband, Will Smith. He references the hard times that the Academy must have gone through during the Civil Rights era despite when Black actors such as Sidney Poitier were building successful careers for themselves.

“The question is why this Oscars?” Rock says. “It’s the 88th Academy Awards, it’s the 88th Academy Awards, which means this whole no Black nominees thing has happened at least 71 other times. You gotta figure that it happened in the 50s. In the 60s. In the 60s, one of those years Sidney didn’t put out a movie. I’m sure there were no Black nominees some of those years. Say ’62, ’63 and Black people did not protest. Why? Because we had real things to protest at the time. We had real things to protest. Too busy to being raped and lynched to care about who won Best Cinematographer. When your grandmother’s swinging from a tree, it’s really hard to care about Best Documentary/Foreign Short. But what happened this year? What happened? People went mad. Spike got mad and Sharpton got mad and Jada went mad and Will went mad everybody went mad. Jada got mad. Jada says she’s not coming, protesting. I’m like, ‘You shooting a TV show?’ Jada’s gonna boycott the Oscars. Jada boycotting the Oscars is like me boycotting Rihanna‘s panties. I wasn’t invited. That’s not an invitation I would turn down. But I understand. I’m not hating. I understand you’re mad. Jada’s mad her man, Will was not nominated for Concussion, I get it. I get it. I tell you the truth. I get it. I get it. You get mad, say it’s not fair that Will was this good and didn’t get nominated. You’re right. It’s also not fair that Will was paid $20 million for Wild Wild West. This year The Oscars, thing’s are gonna be a little different. Things are gonna be a little different at The Oscars. This year, in the in memoriam package, it’s just gonna be Black people that were shot by the cops on their way to the movies. Yes, I said it, alright.”

Rock offers a solution to the problem that is presented when people said the Academy did not properly represent Black people’s contributions to the movie industry.

“If you want Black nominees every year, you need to just have Black categories,” he suggests. “That’s what you need. You need to have Black categories. You already do it with men and women. Think about it. There’s no real reason for there to be a man and a woman category in acting. There’s no reason. It’s not track and field. You don’t have to separate ’em. Robert De Niro never said, ‘I better slow this acting down so Meryl Streep can catch up.’ No. Not at all, man. If you want Black people every year at the Oscars, just have Black categories like Best Black Friend. And the winner for the 18th year in a row is Wanda Sykes. This is Wanda’s 18th Black Oscar.”

Rock also affirms that there is racism in Hollywood, just not how people would usually think of it. He uses a story from a moment he shared with President Barack Obama to explain his point.

“Here’s the question everyone wants to know in the world is, is Hollywood racist?” he says. “Is Hollywood racist? You know, you gotta go at that the right way. Is it burning crosses racist? No. Is it ‘Fetch me some lemonade’ racist? No, no, no. It’s a different type of racist. I remember one night I was at a fundraiser for President Obama. A lot of you were there. It’s me and all of Hollywood. It’s all of us there and there’s about four Black people there. Me, Quincy Jones, Russell Simmons, Questlove, you know, the usual suspects. And every Black actor that wasn’t working. Needless to say, Kevin Hart was not there. So at some point, you get to take a picture with the President. So as they’re setting up the picture, you get a little moment with the President. I’m like, ‘Mr. President, you see all these writers and producers and actors? They don’t hire Black people. And they’re the nicest White people on Earth. They’re liberals. Cheese.’ That’s right. Is Hollywood racist? Damn right Hollywood’s racist. Maybe not racist that you’ve grown accustomed to. Hollywood is sorority racist. It’s like, ‘We like you, Wanda, but you’re not a Kappa.’ That’s how Hollywood is.”

Rock says that there is hope for Hollywood, evidenced by Creed a spinoff of the Rocky series. Michael B. Jordan was not nominated for his lead role in the film, but Sylvester Stallone was nominated for best supporting actor for reprising his role as Rocky Balboa.

Rock comments on Straight Outta Compton by referencing Paul Giamatti’s role as N.W.A’s manager, Jerry Heller. Giamatti also played in 12 Years a Slave alongside Lupita Nyong’o, who won the Oscar for Best Supporting Actress in 2014 for her role as a slave named Patsey.

“There’s a lot of snubs, but one of the biggest snubs, no one’s talking about,” Rock says. “My favorite actor in the world is Paul Giamatti. Paul Giamatti I believe is the greatest actor in the world. Think about what Paul Giamatti has done the last couple of years. Last year, he’s in 12 Years a Slave, hates Black people. This year, he’s in Straight Outta Compton, loves Black people. Last year, he’s whipping Lupita. This year, he’s crying at Eazy-E‘s funeral. Now that’s range. Ben Affleck can’t do that. But what I’m trying to say is, it’s not about boycotting anything. It’s just we want opportunity.”

Later in the show, Straight Outta Compton lost the award for Best Original Screenplay to Spotlight.