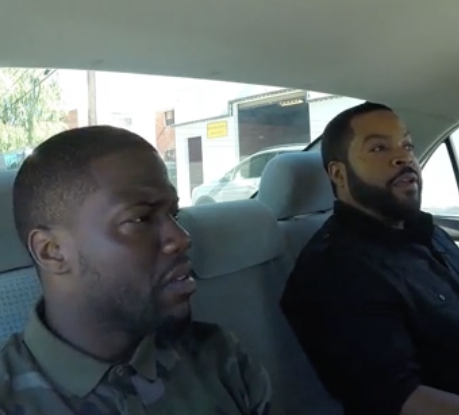 While promoting their forthcoming film, Ride Along 2, Ice Cube and Kevin Hart joined Conan O’Brien in helping a student driver.

The talk show host picks up the two actors in order to “up the anti.”

“I want you to learn what it’s like to drive when there are other passengers in the car and maybe things get a little distracting,” O’Brien says.

When Hart and Ice Cube get in the car, Hart says he is not going to wear his seatbelt.

“Aye, Tupac was one of the biggest thugs I know and he always wore his seatbelt,” Ice Cube responds.

The group travels to a marijuana dispensary and gets a meal at Popeyes while sharing driving tips.

Ride Along 2 is scheduled to release to theaters January 15.

Watch the video of Ice Cube, Kevin Hart and Conan O’Brien helping a student driver below: