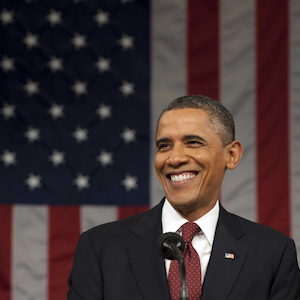 President Barack Obama delivered his final State of the Union address to an annual joint congress in Washington D.C. As always, Hip Hop is putting its two cents into it what the President has to say.

Wale opened by performing at a State of the Union pre-show prior to the President’s speech and even snapped a selfie with Second Lady Dr. Jill Biden.

During his speech, Obama addressed national security, gun violence, the economy and climate change, among other topics. He also touched on police brutality and the overcrowding of American prisons, topics the Hip Hop world are currently more focused on.

Just Blaze tweeted, “Ask Osama bin Laden” reply to Donald Trump’s assertion that his speech was uninspiring and repeated one of Obama’s lines during the address. Russell Simmons thanked the President and called him on his hopes to implement criminal justice reform.

2015 proved to be a pivotal year for Hip Hop’s involvement in politics. Killer Mike has spent an extensive amount of time with Democratic Presidential Candidate Bernie Sanders. Lil B also voiced his support for him. Jeezy has voiced his support for Hillary Clinton and even donated to her campaign, and others have done their part in protesting against social injustice and for police reform.

View Hip Hop’s reaction to President Obama’s State of the Union below: