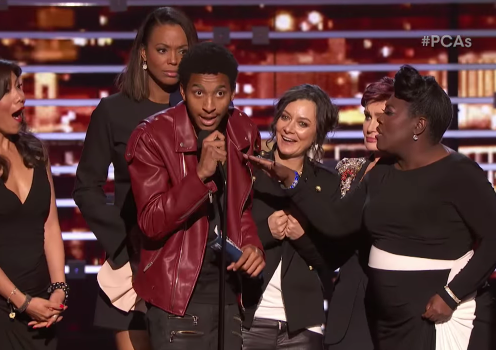 Last night (January 6), the 42nd People’s Choice Awards were held at the Microsoft Theater in Los Angeles, California and boasted of some of the largest stars in their entertainment world.

As the women for CBS’ The Talk were accepting their award for Favorite Daytime Talk Show Hosting Team, an unknown fan inexplicably made his way onto stage and snatched the mic away from Sara Gilbert as she was giving a thank you speech.

“Shout out to Kevin Gates’ ISLAH album,” he exclaimed after incoherently identifying himself and then adding, “Yeezy jumped over the Jumpman”–an obvious nod to Kanye West’s recently released Nike diss, “Facts.” Before the man could get any further with his interruption, Sheryl Underwood reclaimed the microphone and Sharon Osbourne proceeded to kick him in the leg.

Kevin Gates has yet to comment on the incident to the extent of the publicity stunt is unknown as of press time.

The ISLAH album in question is currently slated to be released on January 29.