According to TMZ, rapper and “Love & Hip Hop: Hollywood” star Yung Berg is currently in custody following an alleged attack on his girlfriend. TMZ reports that Berg was charged with “obstruction of breathing” following the incident.

The two were at New York City’s Gershwin Hotel when the musician, who also now goes by the name Hitmaka, reportedly threw his girlfriend to the floor, dragged her by her hair, and hit her in the face.

He also allegedly grabbed her by the neck, which was enough for the “obstruction of breathing” charge.

Upon arriving at the hotel, authorities found Berg’s girlfriend with bruises on her body.

The incident involving Berg and his girlfriend comes days after the rapper was featured on the DeadbeatsIllinois.com website for nonpayment of child support. According to the website, the rapper-turned-producer owes over $80,000 in child support and has not made a payment since 2011.

Last month, Berg revealed that he’s “full of controversy,” during an exclusive interview with HipHopDX.

“My whole life is on the Internet,” Berg said. “I’m full of controversy. So, this shit is like a walk in the park for me. At the end of the day, I love the fact that I get to be myself, like, I’m a controversial nigga. You know? It is what it is.”

RELATED: Yung Berg Admits Turning Down Ray J’s Offer To Appear On “I Hit It First” 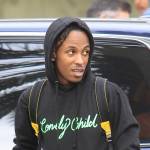