According to AllHipHop.com, Chicago, Illinois rapper Yung Berg owes over $86,000 in child support.

A picture of Berg along with his real name, amount owed in past-due child support, date of last payment, and other information is listed on the DeadbeatsIllinois.com website.

The website reports that the rapper’s last child support payment was received in 2011. They also have him listed as “wanted for failure to pay.”

While speaking exclusively with HipHopDX last month, Berg revealed that his life is “full of controversy” while speaking on his decision to join the cast of “Love & Hip Hop: Hollywood.”

“My whole life is on the Internet,” Berg said while speaking with HipHopDX. “I’m full of controversy. So, this shit is like a walk in the park for me. At the end of the day, I love the fact that I get to be myself, like, I’m a controversial nigga. You know? It is what it is.”

The musician also detailed his decision to pursue producing and writing, during his interview with HipHopDX.

“I stepped back from being an artist around 2009 and I’ve just been pursuing my career as a producer and a writer,” he said. “I wanted people to know I’ve been Grammy nominated a couple of times…So, it was just all about letting people know, like, I’ve sold millions of records and I’m writing for incredible artists, so, me getting that awareness out there was important to me.”

A screen capture of Yung Berg’s page on DeadbeatsIllinois.com can be found below. 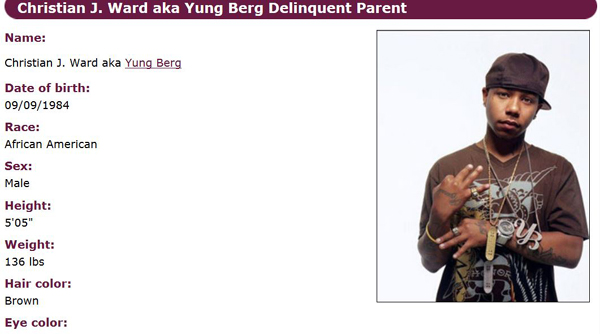 RELATED: Yung Berg Admits Turning Down Ray J’s Offer To Appear On “I Hit It First”