Additionally, Audio Push followed up 2013’s appearance on Lil Wayne’s America’s Most Wanted Tour with its own Come As You Are mixtape and appearances on HS87’s We The Plug album.

Rounding out the trio of co-headliners is Skeme, who looks to follow 2013’s Ingleworld with the tentatively titled Play Dirty, Stay Dirty. If history is any indication, hitting the road may be good for Skeme’s fan base and social media accounts.

“While I was in New York, [Pistols & Palm Trees] was the top trending topic in [Los Angeles] on Twitter and shit like that, so it was a good feeling,” Skeme said during an exclusive interview with HipHopDX in June. “It was something special about that joint. A lot of guys were on there. [Kendrick Lamar] was on there. Tyga was on there. [Dom Kennedy] was on there. Kent from Overdoz was on there. A lot of people was on that project. It was really just the homies. They wasn’t who they are now back then. It was the same thing, the same kind of love. Looking back at it, it was bigger than I was thinking it was back then. I think that’s just how that is: People tie a certain sentiment to a certain point in time. It was a different era for me. It was a different era for a lot of people. You look back on it like, ‘Man, I got some memories to that muthafucka.’”

Tour dates, including stops in Oakland, Phoenix and the unofficial California homecoming in Los Angeles at the Troubadour, can be found below along with the tour flyer: 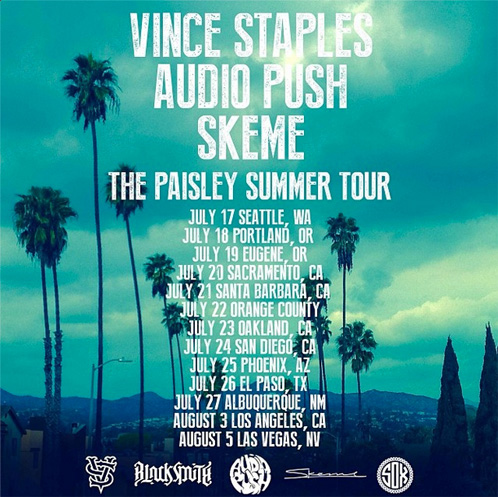