Good Friday Entertainment & Clockwork Music are presenting a Canadian Yasiin Bey concert series. The mini-tour kicks off on July 13 at the Victoria Ska Fest in Victoria, BC and concludes on July 18 at the Phoenix Concert Theater in Toronto, ON.

Quite a few noteworthy artists are set to perform at various venues in Canada in the near future. Tech N9ne and R.A. The Rugged Man are both traveling to Canada for live performances this summer.

Yasiin Bey and his tour deejay Preservation recently dropped the remix version of Mos Def’s 2009 release The Ecstatic, they called it REcstatic. Bey premiered two songs  titled “Black Jesus” and “Young Love” off his upcoming collaborative project with Mannie Fresh titled OMFGOD back in March of this year at a concert in Phoenix, Arizona. Mannie Fresh told HipHopDX that the highly anticipated project is in the mixing process so new Yasiin Bey music is coming. Yasiin Bey made headlines a few days ago when he took part in a demonstration that showed what select detainees at Guantanamo Bay undergo daily.

Canada Tour Dates are below: 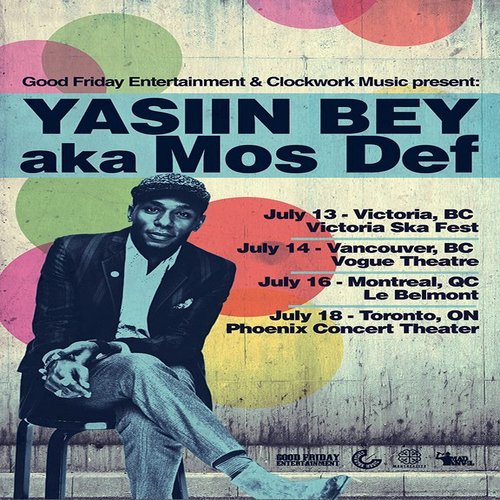